Over seven days on the road through occasional high winds, snow, sunshine, and rain we've seen everything from roadside giants to National Trust success stories to threatened grain elevators saved from demolition to create a city-maintained park.

Today's last day of driving before arriving in Nashville for the National Preservation Conference was no exception to the rule that you never know what you're going to find on the road. We've put together a selection of photos from the day including a hello to Terry, our friend at LaPlace, Louisiana's Frostop Drive-In.

Day 8's post is a little shorter than usual, but after 2700 miles on the road team Vintage Roadside is looking forward to catching up on a little sleep followed by a meet-up with our friend Eartha Kitsch and her mister.

We hope you've enjoyed following along as much as we've enjoyed your emails, comments, and road trip tips.

Now, onto the photos!

In Poplar Bluff, Missouri we found an unusual mix of roadside sights: 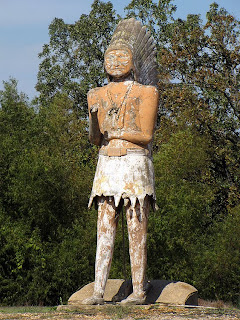 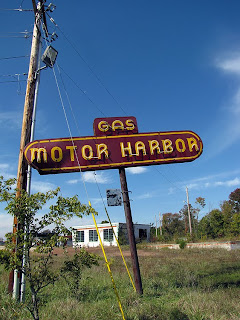 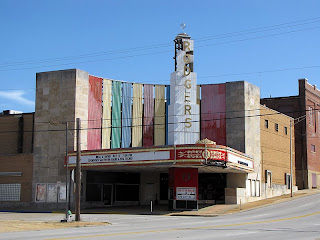 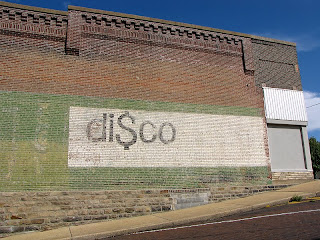 South of Holcomb, we spotted some pets that were not too big, not too small, but just right, along with a vintage deco motel sign. 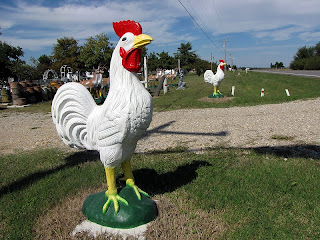 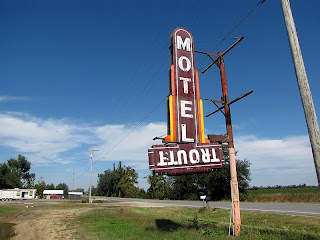 Just before crossing the border into Tennessee we took a swing through Kennett (for you roadside trivia fans, the birthplace of Sheryl Crow) and were rewarded with this fantastic sign: 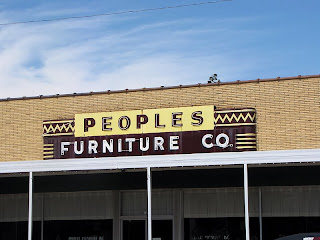 Tennessee at last. Driving through downtown Dyersburg, we whipped over to park when we saw the sign for Dixie Liquor. 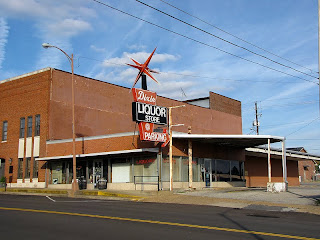 A vintage ad we have describes the satellite structure on top as a Neo-Lectra sign topper built by Standard Neon Supply Company of St. Louis measuring 13 feet in width and requiring approximately 132 feet of neon tubing. 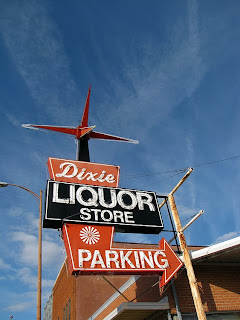 We also go to meet the mayor of Dyersburg who happened to park across the street for an event while we were taking photos. There's some random roadside fun for you.

Just as the sun was setting, we stopped in Huntingdon and met Leslie, owner of the Court Theatre. He was outside working on the marquee and offered to let us roam around inside although he was closed for the day.

View from inside the ticket booth (hello Frostop!) 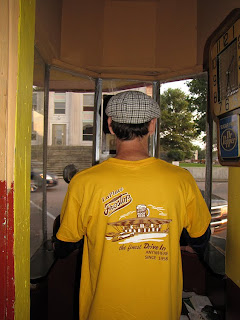 Opened in 1920, Leslie has owned and operated the Court Theatre for the past 12 years and, although the maintenance is continuous, enjoys being the owner of a place with so much history. In addition to work on the underside of the marquee, the front has recently received a fresh coast of red paint to be followed shortly by a new coat of bright yellow on the stripes. 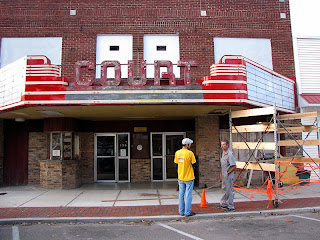 Cue drumroll, please...we're happy to say that Nashville looks as interesting at night as we had imagined.

Tucked into our motel for the night, we're looking forward to a great week ahead at the conference. Although not on the road, we'll continue to bring you updates on our blog and Facebook page including a picture of the limited edition t-shirt we produced in honor of Nashville's roadside history.

did someone say Holcomb? I know someone who will enjoy that!
Great finish to day 8! Finding someone who is working on a restoration as you show up! Awesome!
look forward to more updates!

Thanks for the shout out!! Love seeing the shirt on a roadtrip! Keep up the great work!

Wow, so glad I caught up on your roadtrip, thanks for being so thorough and timely with the posts! Alas I'm a gal who gets a bit woozy when reading anything in the car, so there isn't an easy way for me to blog and ride at the same time. You made me want to hit the road and enjoy this beautiful country of ours!

Glad your in, and sell up a storm. Can't wait to see more sights of Nashville. hugs

Austin - How cool was it to stumble into a town named Holcomb!? It was a nice piece of luck to meet Leslie while he was working on his theatre.

LaPlace Frostop - You're welcome! We proudly wore our Frostop shirts down the entire length of Missouri. And you guys keep doing what you're doing!

Mod Betty - Thanks for taking a look at our trip! We appreciate the kind words and are thrilled you enjoyed it. We tend to blog in the wee hours of the night as we've found sleep really gets in the way during these long trips:-)

Kathryn - We're all settled in and got the booth set up today. It looks great and we really enjoyed having a few people stop by to let us know they had been following our trip:-)

Hi Vintage Roadside, I was pleasantly surprised when I stumbled onto your blog. My dad, O.C. Goodman opened Dixie Liquor in the early 60's. I still have a lot of the original neon from when the sign was restored in the 90's. Sadly, the sign is now gone. The new owners sold it to a bar in Sturgis South Dakota and that bar burned down with that sign and many others.

Hi Steve - How wonderful to see your comment! It was truly an amazing piece of art and one of our favorite signs we've ever run across. It's a shame it met an unfortunate end. Hope all is well in your part of the world!