We had a little trouble with internet access in rural Missouri last night so Saturday's post is coming to you after a short delay. We're happy to report that we're back on track and have resumed our regularly scheduled programming. We now present Day 7 of Vintage Roadside's road trip to the National Preservation Conference in Nashville.

We started the day in Arrow Rock, Missouri - a town we'd been looking forward to visiting as it was listed as one of the National Trust for Historic Preservation's Dozen Distinctive Destinations. 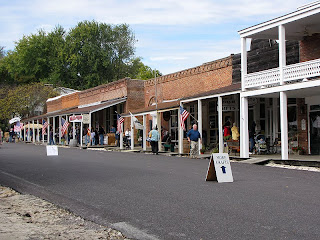 Each year since 2000, the National Trust's Dozen Distinctive Destinations program has selected 12 unique cities and towns across America that are working to preserve their historic character, promote heritage tourism, enhance their community and encourage others to enjoy all they have to offer.

Our timing couldn't have been better for this visit. When we arrived in Arrow Rock, the town was in the midst of their annual Craft Festival. The streets were so full that we had to park over at the adjacent Visitors Center (which also houses a wonderful museum) and walk in - a good sign that the town had a successful party on its hands.

From wood carving to apple butter making, we poked around and took in the demonstrations of traditional crafts. Our favorite entertainment, though, was the village dancers and accompanying band. With taps on their shoes, along with period clothing, the dancers and the band were the highlight of the festival for us. 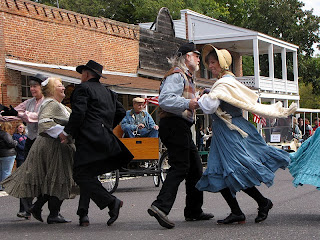 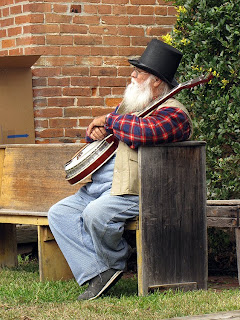 We also recently learned that the National Trust's Midwest Office was active in helping prevent a huge confinement hog farm from being built near Arrow Rock last year.

After Arrow Rock, we drove a few miles down the road to Blackwater, a place that some have referred to as the town that wouldn't die.

Once a railroad boom town with a history dating back to 1887, Blackwater found itself in 1990 with just four downtown businesses still operating and nearly all of the buildings seriously deteriorated. Many, if not most, people would have been tempted to walk away from the challenge of trying to revive a business district in such bad condition. 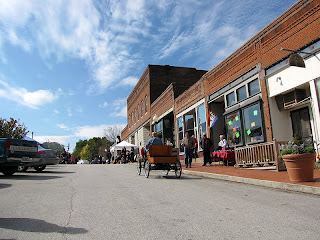 Instead, a group of residents formed the Blackwater Preservation Society in an effort to save their town. Walking around Blackwater - also hosting a fall celebration on the day we arrived - it's obvious that the town is an incredible preservation success story. 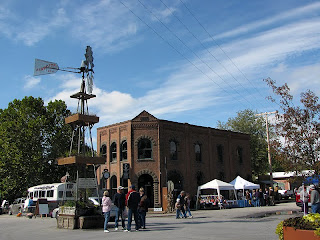 As fans of roadside museums we hit a home run when we found the Museum of Independent Telephone Pioneers in the old Bank of Blackwater building. They have great displays of switchboards, phones, phone books, and photographs - definitely worth the trip to Blackwater even without the bonus of the Fall Festival! 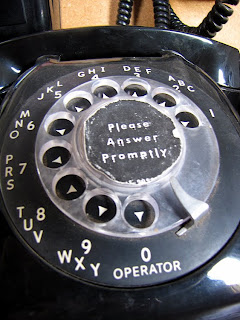 Shifting gears, we headed down Highway 87 to Lake of the Ozarks for some bumper cars and roadside attractions.

Along the way we stopped for this sign in Eldon on the 54 Business Loop through town. 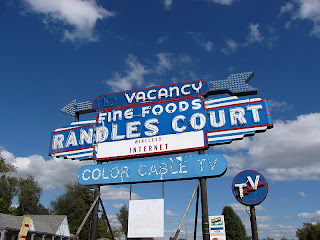 At last, Lake of the Ozarks! Those of you who have spent time with us know that we have what some might call an inordinate fondness for not only collecting, but also photographing fiberglass giants. Today's visit was no different. 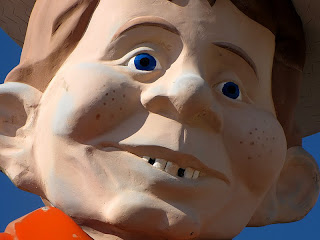 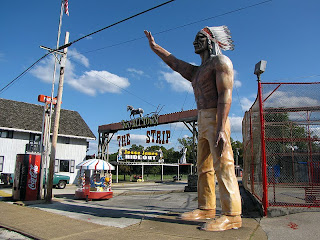 Almost blinded by fiberglass fabulousness, we did manage to find a few other sights around town. 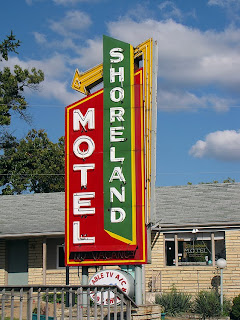 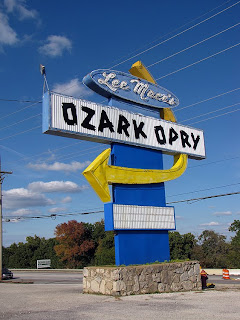 Back on the road, we headed to Newburg for our first encounter with Route 66 on this road trip.

We had a great time traveling Route 66 last year to the National Preservation Conference in Tulsa, highlighting over 50 preservation projects along the way...and a treasure trove of neon signs. If you're interested in seeing some of those Route 66 photos, you can take a look at last year's blog here.

In Newburg, we visited an iconic sight on Missouri's Route 66 - John's Modern Cabins. With history reaching back to the 1930s, the cabins were effectively cut off from the motoring public in the 1950s by I-44 and have slowly deteriorated over the past half century. The most surprising thing about our visit to this spot was the sense of place and time conveyed by the cabins and their location on the isolated section of Route 66. With a little imagination you can look beyond the rotting wood and feel the excitement of the early days of road travel and the novelty of staying at a cabin in the middle of Missouri. We're glad we stopped by. 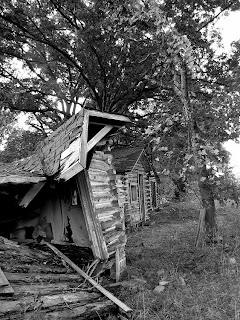 Before turning south for Doniphan we stopped to photograph our final roadside giant located in Rolla at the Mule Trading Post. Although not made out of fiberglass he has been recently restored so that his arms windmill once again - we call that a fair trade. 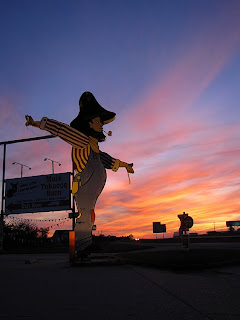 See you tomorrow in Nashville!

One of the fiberglass giants looks like Alfred E Newman!
Love the Shoreland Motel sign.
I hope several shots were snapped in the telephone museum!

Austin - The Half-Wit Muffler Man is pretty awesome isn't he? We did get several other shots at the phone museum - we'll save those for the 17 hour showing of road trip photos at your place when we get home!

Oh my, did you make the backyard any bigger? Hey Ma, look who's comin' to dinner :o)

Love the home that used to be. A little paint and could look real nice, Pa!