With the Vintage Roadside vehicle packed to bursting as usual (peripheral vision is definitely overrated), we headed out of Portland this morning to the National Trust for Historic Preservation's National Preservation Conference with a goal of three-hundred miles for the day. We're happy to say that we met our goal and are enjoying an incredible evening at the beautifully restored Geiser Grand Hotel in Baker City, Oregon.

Before we start on that story, let's take a look back at the day. (See the room with the light on in the picture below? That's us typing away!) 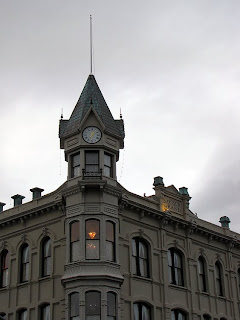 After battling what we're certain were epic winds through the Columbia River Gorge, our first big stop of the day was in Pendleton, Oregon, a town recently voted a "Top Ten True West Town" by True West magazine primarily for its historic preservation efforts. Digging into that reputation for historic preservation, we found a successful facade restoration program begun in January 2006.

Although a number of facades have been restored to date, the Rainbow Cafe is highlighted by the City of Pendleton as the project that kicked off the program and inspired much of the restoration along Main Street. In addition to reconstructed windows and a painted exterior stripped back to its original brick, the Rainbow Cafe also catches the eye with its restored original neon sign. 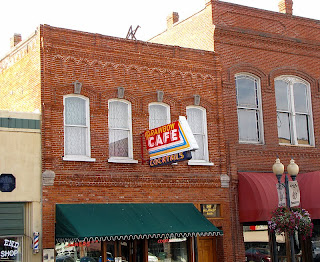 In addition to the Rainbow Cafe, there were a number of other great signs to see around Pendleton: 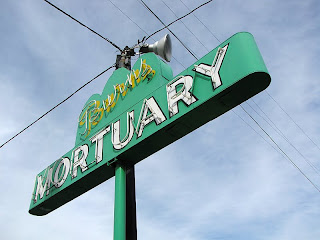 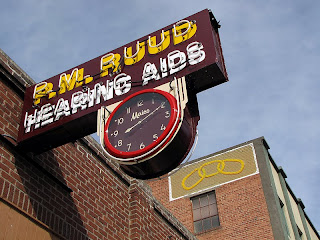 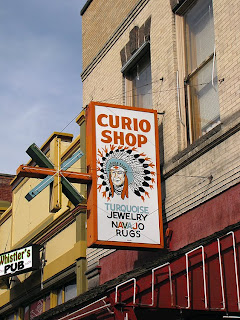 Moving on, our next stop was La Grande, Oregon. We had one of those slam on the brakes moments when we spotted this restored Texaco gas station. 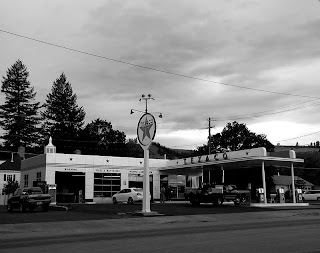 Looking for a little more information about the station, we checked out our friend Deborah Jane's website. According to her notes, the station was "being restored in 2008...a retired pastor plans to return this long-closed 1959 station to selling gas from vintage pumps." As far as we could tell, the station is up and running and definitely worth a stop if you're passing through La Grande.

In addtion to the Texaco station, we also found this J.C. Penney Co. ghost painting and stopped by the La Grande Drive-In Theatre. 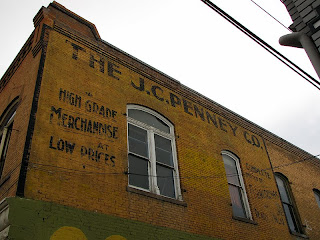 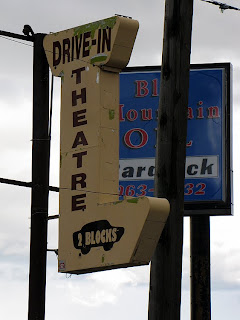 Finally, our destination for the day: Baker City and the Geiser Grand Hotel. We'd heard about the massive restoration project at the Geiser Grand ($7 million over five years) and viewed a number of photos online, but found ourselves a little awed by the beauty of the place as well as the scale of its restoration.

Barbara Sidway, owner of the Geiser Grand, kindly sat down with us and shared some behind-the-scenes stories of one of the most ambitious preservation projects we've ever come across.

The first time Barbara saw the interior of the hotel was with the aid of a flashlight. Vacant for roughly a quarter-century, all of the exterior windows had been painted over, leaving the interior pitch black no matter the time of day. (There was a little natural light on the third floor, but only because part of the roof was missing.)

After inspecting the Geiser Grand in all its glory - shuttered since 1968, unheated, soggy, and smelling of roosting pigeons, Barbara and her partner made a decision that would dramatically change their lives. Rather than walking away from a building that was falling down around them, they decided to save it.

Surviving the installation of a new foundation that was either going to make or break the building, Barbara and her partner went on to painstakingly restore the hotel as close to the original as possible, searching through historic documents, old photographs, and oral histories for clues. 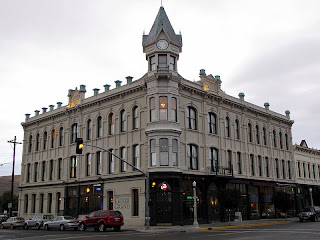 Three of our favorite things about the Geiser Grand:

- I guess because we're always attracted to the unexpected, one of our favorite spots in the hotel is the Historic Cellar where you can see the original rock walls and windows that once led into Baker City's underground tunnels.

- Although we assumed that the beautiful chandeliers hanging througout the hotel were original to the 1889 structure, Barbara confirmed that every single original light fixture had been removed from the hotel years before her purchase. The chandeliers you see throughout the hotel were actually one of Barbara's greatest finds: 27 matching leaded glass Venetian chandeliers with ruby red glass, circa 1920s.

- Over 80% of the hotel's restoration work was done by local workers and craftsmen. 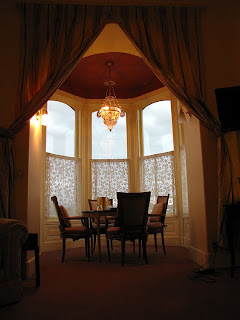 In addition to saving a beautiful historic building, Barbara and her partner's restoration accomplished something that will make any traveler want to stop at the end of a long day on the road -- a comfortable come-as-you-are atmosphere (from jeans to pearls), great food and drinks in the restored saloon, and friendly staff that don't blink an eye when they catch you photographing the woodwork.

Many thanks again to Barbara Sidway for her generous hospitality and for sharing some of her great restoration stories.

Tomorrow we begin Day 2 of our trek to the National Trust's annual preservation conference with a tour of Baker City's historic downtown led by Ann Mehaffy of Historic Baker City Inc. Following our tour, we'll hit the road and head for a couple of grain elevators in Twin Falls, Idaho that we guarantee you're going to love.

Feel like I am on the roadtrip without leaving home - looking forward to all the updates! Have a great trip!

Great post, great neon signs. Would love to see these places some day. Looking forward to your future posts!

Amazing! These places our in my backyard and I didn't have a clue. I want to drive out there just so I can get gas at the Texaco station!

Great post you guys! That hotel is amazing! Have fun in Twin Falls and try and get a photo of the Turf Club neon sign..it's pretty cool!

Terry - Thanks for coming along with us! We're looking forward to a shot or two wearing our Frostop t-shirts:-)

Gunnar and Sherry - Thanks for taking a look. We always appreciate you guys following along!

Sputnik - We're bunking in Twin Falls tonight and will be seeing the town in the morning. Thanks for the tip on the Turf Club. Probably not the same as the one in San Diego though is it?

How lucky are you to stay at the Geiser with such an amazing host as Barbara Sidway! Loved your photos. I'll keep reading.

d-figuerero - Isn't Barbara wonderful!? We felt incredibly lucky to be able to spend some time with her. We're looking forward to many more good times together:-)

Do you have a map that can show us your route?

I wish I were able to do the trip to the conference as a road trip - Nantucket to Nashville.

Would strongly suggest a short diversion to Springfield, IL and hit the Cozy Dog. Additionally, on your way south again to Nashville, try to stop in at the Land Between the Lakes National Recreation area and take a look at whats happening in Clarksville, TN (after a tornado tore apart the city).

acornhp - Sorry we didn't create a graphic for this one. We'll be driving about 2600 miles each way, but haven't settled on the route home yet. We're at the edge of Nebraska now and will be spending the next two days working down through Missouri.

Nantucket to Nashville would be a great road trip.

Thanks for the tips. We've got the Cozy Dog as "hopeful" for the trip home but weren't familiar with the Land Between the Lakes.

If you have time at the conference stop by our booth and say hello!

Hey you two, what were the underground tunnels used for at the Geiser? Would so love to see that building in person.