You know those days where you crave nothing but a real drive in cheeseburger? Not something from a chain, or that fancy "sit down" place, but a burger grilled just for you and, more often than not, with some sort of catchy name that makes it just that much better. And while you're at it you might as well throw in an order of fries and a milkshake, you know, as a way of showing further support for mom & pop businesses. They appreciate it and you'll sleep even better after the meal.

Here's an example of what we're talking about. Ladies and gentleman exhibit A: 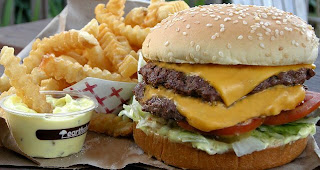 After staring at that photo for days we knew the only way to find out if the food tasted half as good as it looked in the photo was to make the drive up to Olympia, WA and eat at the Eastside Big Tom. So, in the name of research we loaded up the wagon and headed north. 115 miles later we spotted the first Big Tom plywood mascot and we knew we had found the type of place we're always hoping for. 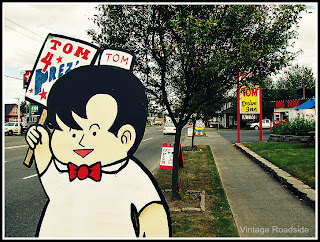 Before we talk about the food we wanted to share a bit of the Big Tom history. For us the only thing better than a great roadside business is one with some history behind it and we were lucky enough to hear some of that history from the owner Michael.

Originally founded in 1948, the Big Tom is the oldest "drive thru" restaurant in Washington state. Here's a look at the original building on the site: 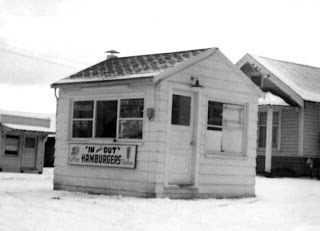 Around 1960 or so the building was upgraded and locals were lining up for the "Big Tom" burger at the Eastside In & Out. 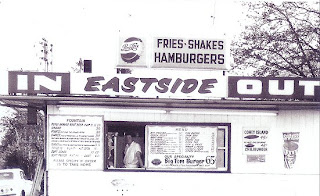 In 1969 the Fritsch family purchased the business (after working there for several years) and a new chapter was born with the Eastside Big Tom. In 2008 Michael Fritsch purchased the business from his parents and has devoted himself to quality food, great customer service and a welcome sense of humor as evidenced by this photo of him gamely posing with our mascot Stinky. 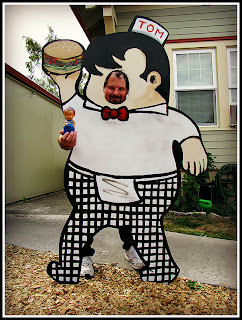 By now you're all asking, "How was the food!?" We're happy to report it was seriously one of the best drive in meals we've ever had. We'd also like to point out the customer service was completely on the ball and the entire place was spotless. And as any local drive in should, they do have their own special ingredient used not only as a dipping sauce, but also as a burger dressing. The name of this wonder ingredient - Goop! We've enjoyed many special sauces over the miles but this one was unlike any we'd had before. Here's a photo of Goop in action (in a Big Tom compostable container none the less): 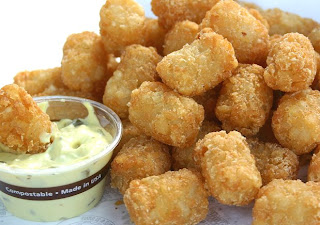 Another great feature of the Big Tom menu is the amazing selection of milkshakes and malts. We went with the root beer milkshake on our visit and now have plans to work ourselves through the entire menu. We also enjoyed the atmosphere of the place - it felt like a roadside attraction and that's always a good thing! 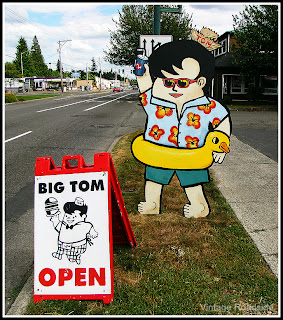 The Eastside Big Tom is located at 2023 4th Ave East in Olympia, WA. Open 7 days a week, they accept cash or checks only but do have an ATM on site. For all of us who live out of the area, but still enjoy looking at photos of great drive in food presented with a bit of humor, you can become a fan of their Facebook page here.

Until next time Big Tom... 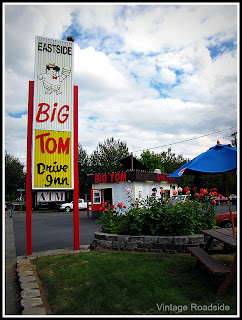