We wanted to let everyone in the Portland area know that our friends Carl & Caren from the fabulous Velveteria will be launching their new book at Powell's tomorrow evening. In addition to the book launch a selection of their paintings will be hanging in the Basil Hallward Gallery for the month of May. This will be a great chance to see a little something different on a First Thursday! 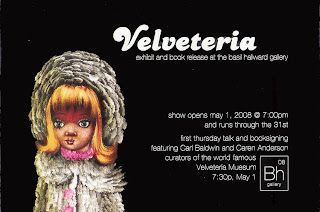 Hope to see you there.
Posted by Vintage Roadside at 9:45 AM No comments:

Last Friday evening we realized it was time to fit in some recreation. We love bowling and rollerskating, but were in the mood for something new, something unique...with pirates, and special effects, and glow in the dark monsters! Too much to ask for, right? That's when we discovered that downtown Portland is home to an indoor miniature golf course. Not just any miniature golf course, but one chock full of pirates, painted entirely with ultraviolet paints and bathed in black light. Needless to say this caught our attention and a tee time of 8:30 pm was arranged.

Once you arrive there's no mistake you're at the right place. A pirate statue greets you outside the door and points you towards the stairway heading down below the Hilton Tower. 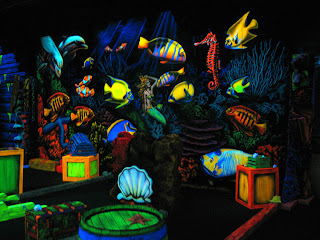 Once downstairs we were amazed at the quality of the painting and lighting. The ultraviolet painting was done extremely well and the black light really brought out the 3-D effects. There are also a few motion activated effects that make the experience even better. (Caged, angry monsters anyone?) 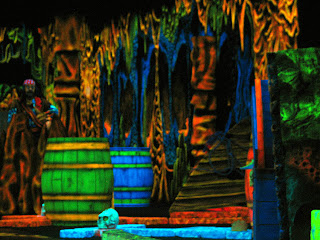 As for the course itself, we would have enjoyed a little more challenge to the holes. The majority of the course is flat with no real "gimmick" holes. Our round of 18 went by fairly quickly due to this, but we still had a great time. We'd recommend going just to experience the fantastic artwork. Perhaps over time they'll add a little more difficulty to the course, but anyone who opens a pirate-themed-ultraviolet-blacklight miniature golf course gets a tip of the hat from us here at Vintage Roadside! 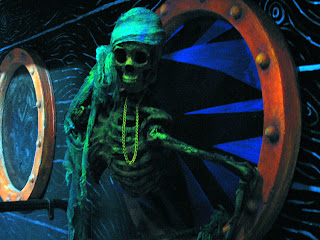 Update - The Slick Chick Drive In has arrived!

Our Slick Chick Drive In shirt is now available on our website. History research is still underway but you can see our newest shirt here. 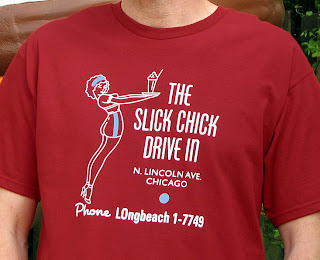 We're working on putting the finishing touches on our latest t-shirt and expect to have it up on the Vintage Roadside website later this week. The Slick Chick Drive In was located in Chicago, Illinois and operated for about 10 years between 1953 - 1962. The graphic is great and we can't wait to have you all see it!
Posted by Vintage Roadside at 2:51 PM No comments:

The story behind our Riverside Stadium Skating Rink t-shirt

Riverside Stadium, located in the Foggy Bottom neighborhood of , was the epicenter of sporting events in the nation’s capitol throughout the 1940s and '50s. Originally opening as an open air arena, Riverside Stadium eventually grew to a 30,000 sq. ft. indoor showcase featuring practice areas at each end, a snack bar, and a wonderful westward view of the . 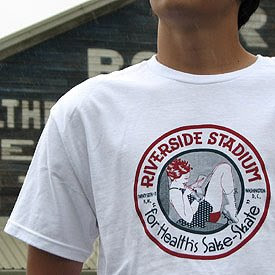 There were other skating rinks in town such as the Uline Arena and the National Rink, however, roller skating was just the tip of the iceberg for . Here are but a few of the historic events Riverside Stadium played host to:

Riverside Stadium also proudly served as the training camp for Joe Louis as he prepared for ’s first heavyweight bout, held on May 23rd, 1941 at Griffith Stadium. Mr. Louis retained his title when Buddy Baer was disqualified at the beginning of the seventh round.

Riverside Stadium continued to provide a home at 26th & D for roller skaters and sports fans until the late 1950s under the operation of S. G. Leoffler. On a slightly bizarre note, Riverside Stadium is also reported to have been used as temporary offices for the CIA at the end of the 1950s.

Stadium came to an end in the early 1960s, demolished to make way for construction of the National Cultural Center, renamed in 1964 as the Kennedy Center following the assassination of President Kennedy.

If you have additional informaton or stories about Riverside Stadium we’d love to hear from you.