Field Trip! How long has it been since you've thought of those two magical words? For us it had been way too long. So, when the opportunity arose last week to spend the day showing Charles Phoenix around we loaded up the car and headed for Estacada. Our destination - The Safari Club.

After rounding up the gang we spent the drive out relating stories and rumors we'd heard about the Safari Club. David had heard the animals were gone..... Justin had heard they were still there... Charles enjoyed his Franz cookies from his visit to the bakery earlier in the day....

As we came into town we spotted the sign from a few blocks away. If you've ever driven miles and miles to visit a "legendary" place you'll know the feeling you get when you arrive and the place is actually standing (and open) - relief! 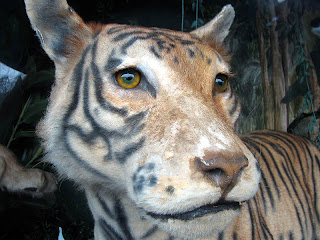 Our first impression - Wow, the place is huge! The Safari Club takes up most of a city block and is covered with split rock and some sort of wild green plastic thatch. We all agreed that these attributes boded well for true entertainment possibilities. 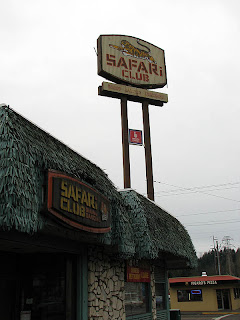 Upon entering you're given a choice. Bright restaurant to the right, dim lounge to the left. Oh, you're also met by a huge pair of bears giving you a hint to what lurks within the lounge. The bears are roughly 8 - 10 feet tall and while they've aged a bit they're still one of the more impressive pairs of greeters we've seen. That 3' tall fiberglass chef statue found outside many restaurants would simply be an appetizer for this pair. There's also a sign with information about the origins of the Safari Club: 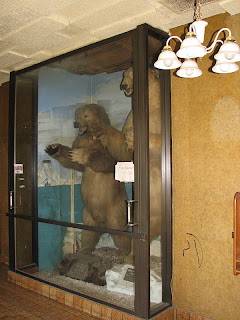 "The Safari Club was designed and constructed by Jorgans Construction Company in 1970.

We hope that you enjoy your visit in this unique club and further hope that you, your family and friends return time and time again. This is the only one of its type in the world today. It is owned by Park Enterprises and is managed by Mike Park.

This collection of outstanding trophies in this club was taken on 23 different hunting expeditions to six different countries through the world over a period of six years. The majority of trophies taken by world-renowned big game hunter Glen Park have now been entered in the World Record Books. Glen Park is the most active and outstanding hunter in the United States today.

It was Glen Park's idea to share these outstanding, beautiful trophies with the local citizenry by building a unique safari club." 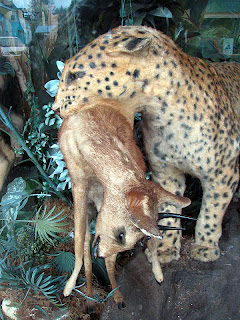 After reading the sign it was evident that the Safari Club wasn't like the other lounges around town! The question we all had was how had the place fared over the last 4 decades? Was there anything left? Did the animals look real? With memories of watching Mutual of Omaha's Wild Kingdom on Sunday nights we headed for the lounge. 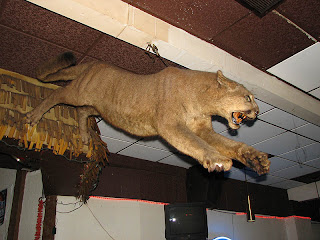 Our initial reaction was that the lounge looked like many older lounges during the middle of a week - fairly dark and quiet with a few regulars at the bar. As our eyes adjusted to the light we noticed the very large floor to ceiling glass case located in the middle of the lounge along with another large display window in one corner. In the middle case a pair of tigers have been locked in mortal combat for almost 40 years. The gashes and blood still look shockingly bright after all these years. Another of the big surprises in the lounge area is the trio of cats suspended over the dance floor.

(Unfortunately the lights in the lounge area cases are no longer functional so photography is limited to using a flash.) 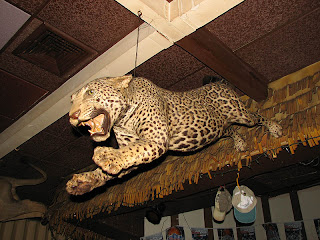 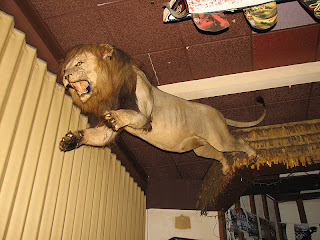 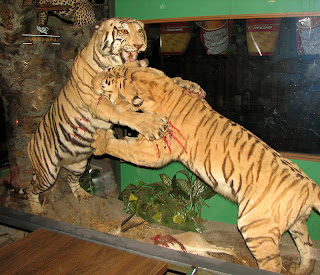 In the lounge we noticed numerous patches on the wall of a different color. These marked what were once dozens of mounted heads that no longer reside at the Safari Club. The gal we spoke with mentioned a walrus head with 5' tusks that almost reached the ground. It's a bit unclear where they've gone, but that does tend to add to the mystery of the Club. 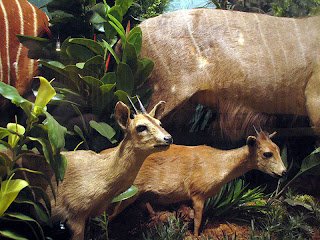 The true gem of the Safari Room is the "dead zoo" located behind the large vinyl curtain in the lounge. Behind this locked curtain is another area that covers almost a full third of the building. The day we visited we were thrilled to be admitted behind the curtain into a chilly room where we saw a few tables, a pool table, and three more large dioramas. 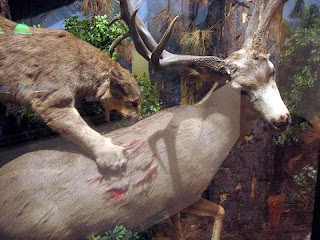 In these we see more examples of the food chain at work. Cougars bring down deer, bears enjoy a meal of an elk, and in the third display another cougar prepares to jump from a pine tree onto the back of an elk.

We'd once again like to express our thanks to the Safari Club for allowing us to visit this area. 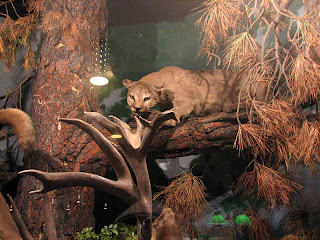 We were told an amazing bit of history the day we visited that we couldn't recall ever hearing before. Apparently the Park family also had a large cabin up near Mt. St. Helens with a collection of taxidermy that was far more extensive than the Safari Room. Many of the prize pieces had been moved to the cabin at the end of the 1970s. When Mt. St. Helens erupted the cabin and all of the collection were destroyed. 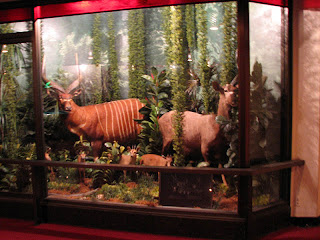 We'd highly recommend a trip out to the Safari Club. While a portion of the collection is no longer at the restaurant it's an amazing look back at another era. While many themed restaurants appear to have been decorated with the goal of appealing to a large number of patrons, the Safari Room appears to have been created simply to house the collection of Mr. Park. It's still possible to see how this place captured the imagination and drew customers from surrounding towns for a night of fine dining and dancing.
Posted by Vintage Roadside at 5:52 PM 5 comments: