Have you ever looked at a vintage postcard and wondered what the story was behind it? Who's the person in the photo? How did they end up there? What became of them?

Being history geeks we end up asking ourselves these questions over and over as we look through the postcards, brochures, newspaper articles and promotional photos we've gathered as research for our line of t-shirts.

With the release of our limited edition Atomic Tunnel t-shirt we decided to dig back into our research and see if we could uncover any new clues to the story behind "Florida's Biggest Little Attraction." 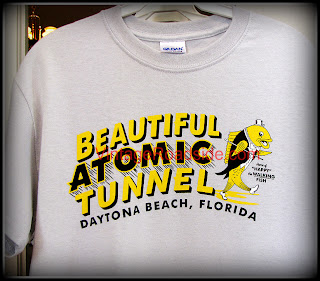 The Atomic Tunnel was built by W.R. Johnston and offered guests the chance to see exotic birds, tropical fish, monkeys and the opportunity to be photographed as an Orchid Queen - all while wandering through a circular tunnel pierced with porthole windows.

In addition to three wonderful brochures, the Tunnel also offered the staple of every roadside attraction - postcards. After several years of research we've come to the conclusion there were a total of three postcards offered in the few short years the Tunnel existed. Our favorite has always been the one showing a woman admiring one of the many orchids on display. 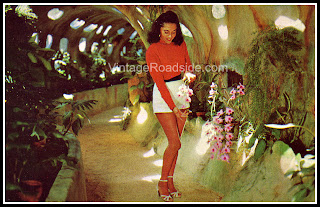 Over the years we've looked at the card and wondered who she was. Did she work at the Tunnel? Did she have memories of the attraction? And the biggest question of all - was she still out there somewhere?

All those questions, and more, were answered today in an amazing 90-minute phone call.

The woman in the photo is Joy, an 87-year-old resident of Daytona Beach, and her appearance in the postcard was her second job as a model. Her first modeling job was appearing in a promotional brochure for the Elena Village Country Club, a post-WWII development in Daytona Beach. That work, which also included her two-year-old son, led to her being asked by a local marketing firm if she would be interested in working with the Atomic Tunnel. She remembers the Tunnel as being quite beautiful, with gorgeous birds and tropical fish, and how wonderful all of the orchids were. When asked about the red sweater she wore she remarked that red always makes her happy...and the one in the photo was very tight! :-) It was also quite an occasion when the photo was featured on the cover of the Sunday supplement that appeared in numerous Florida newspapers in May of 1955.

We also talked about her family, a little about what we do, and all of those unrelated things you talk about when you meet someone for the first time. It was exciting to discover a shared love of history, of having traveled to some of the same places, and her involvement with the Daytona Beach Red Cross Volunteer Lifeguard reunions.

But for us the most rewarding part of our conversation is that now, when we look at the postcard, we don't have to wonder who it is - it's our friend Joy. And that's probably a pretty good way to explain why we do what we do.