We're thrilled to announce the reunion and completion of our A&W Burger Family here at Vintage Roadside!

The trip seemed simple enough: 1400 miles, 48 hours, and 1 Papa Burger statue. The trip South went well and we enjoyed seeing all of our favorite roadside sights throughout Southern Oregon. We spent the first night in Red Bluff, California and hit the road Sunday morning for the final 3 hours to meet the big fella pictured below. (We gave him a few moments alone to say goodbye to the back yard he's called home the last 12 or so years) After farewells were said we then proceeded to "hop" him across the yard the 150 feet or so out to the waiting truck. The process involved us lifting him about 3" and shuffling about 5' at a time. He's not so overly heavy as he is awkward due to that big hamburger 9' up and out in front of him. We finally reached the truck and were ready for the biggest hurdle: How will the two of us lift him 3' up into the truck? 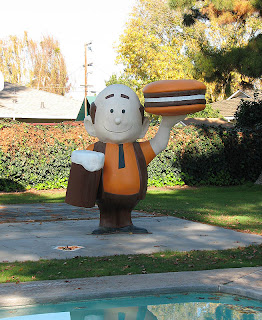 As you can see in the photo below he's all loaded up and ready to go. What you can't see is that this is about 90 minutes after we had reached the truck! Our original plan was to tip him backwards and "pull" him up into the truck. After tipping him backwards we soon realized his burger and mug were much wider than the truck. At this point we were left with Papa Burger laying on his back partially up the ramps we had brought, us with arms like noodles, and a steady stream of people driving by staring and waving. As we were quickly running out of ideas we heard someone slow down and say the 5 greatest words we could at that time imagine - "You guys need some help?" And to add to this tremendous turn of events, the gentleman was a furniture mover! So, up into the truck he went. He proceeded to lift Papa by the back of his ears while one of us lifted his mug and the other lifted his feet and pushed him upright in the back of the truck. Total time involved, about 10 seconds. We then strapped him in and pondered the safest way to transport something that was now 12 feet in the air at highway speeds. 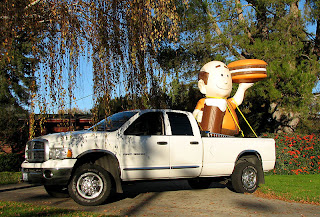 As you can see in the photo below we decided that without a doubt safety needed to be our number one priority. While we would have loved to have left him uncovered for the amusement of our fellow motorists, we simply did not want to risk his hamburger coming off as we were driving. Since he's now over 40 years old we just didn't trust everything to hold securely. So Papa suffered the humiliation of being blindfolded for the entire trip home. This proved to be another step that took about 17 times as long as we thought it would. It seemed simple: pop into the local home improvement store, buy a giant tarp, throw it over him, tie it up and hit the road. We started with the largest tarp they had. The next step was to cover him up. Sounds simple until you're standing in the parking lot trying to figure out how to get 20 pounds of tarp over the top of something that high up in the air! Several methods were employed until we finally had his head and burger safely secured together. Total time involved: 2 hours. At this point we were finally ready to head back North. Since we were worried about the weather on the pass near Ashland we decided to drive as long and far as we could. We reached the summit of the pass about 3:45 am only to discover it was already snowing quite heavily. We were lucky to have made the summit as the Southbound side of I-5 had reached a standstill due to the number of accidents and disabled semi trucks. We fell in line behind several trucks and slowly made our way down the mountain. Total time to travel 7 miles: 1 hour. We were starting to get pretty tired at this point so we stopped at a rest stop for a bit of a nap. One thing we realized is that it's much easier to sleep in your car when you're younger! 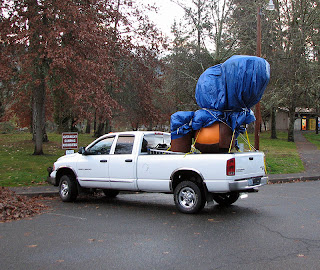 Below is a shot of Papa upon reaching his new home. We'd like to thank our neighbor Mike (and his son) for lending a hand in unloading Papa and for being such a fan of the "Family". 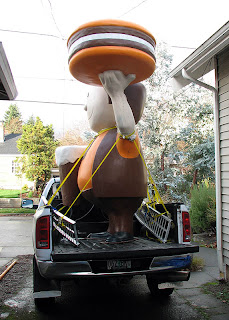 Here's where Papa stands today. We'll do some shuffling of Mama Burger, Teen Burger, and Baby Burger next week and have the four of them standing as a group once again. We're thrilled to finally have our complete set and look forward to years of enjoyment! 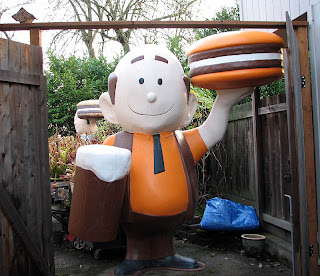