Last Saturday was the 5th Rose City Round-Up traditional hot rod show and it was another great show! It was fantastic to have some sun this year, so without further delay here are a few of the things that caught our eye at the show this year. 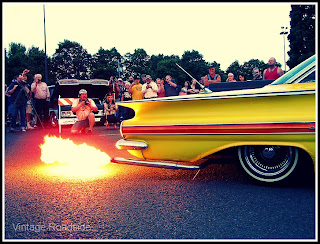 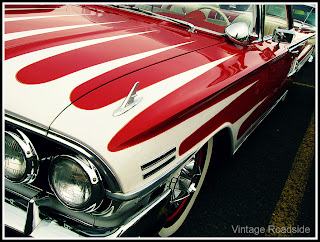 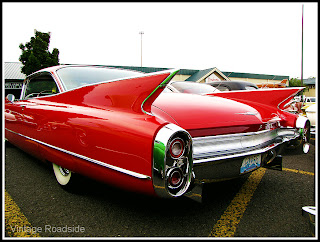 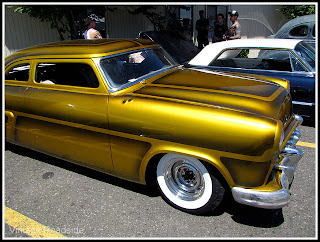 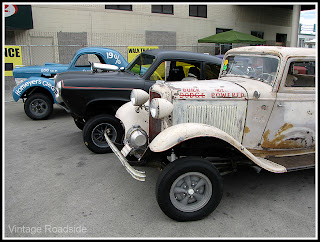 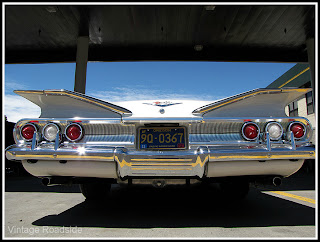 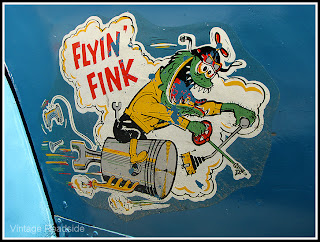 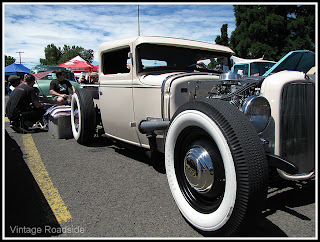 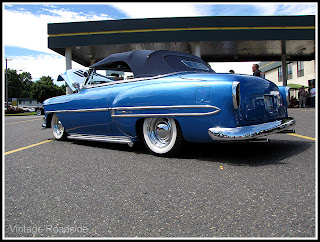 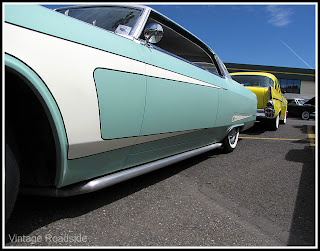 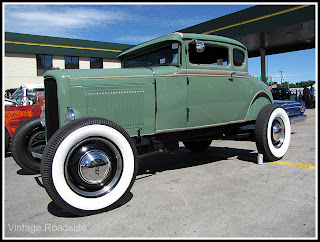 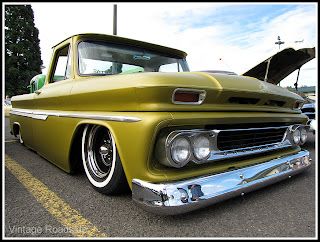 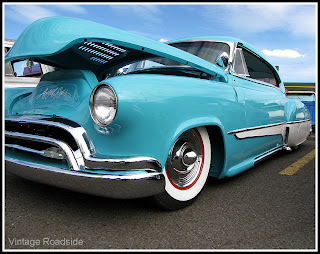 This weekend we'll be up at the Billetproof show in Chehalis, WA for another round of automotive art!

Posted by Vintage Roadside at 10:36 AM No comments:

Howdy gang! Things have been jumping and we thought it would be great to catch up with all of you. So, here comes roughly 96 hours, jammed into 10 minutes of reading time. Or 12 minutes if you'd like to leave a comment. :-)

There were two great events this past weekend here in Portland - both presented by the Historic Preservation League of Oregon. Saturday's offering was the "Mid-Century Marvelous Home Tour" highlighting some of the homes built by Robert Rummer in the Bohmann Park neighborhood while Sunday saw the return to Portland of pop culture humorist Charles Phoenix at the Hollywood Theater.

As part of Charles' prep for his show he wanted to revisit some of his favorite places & things that you can only find in Portland, as well as visit a few new places. We were thrilled to get to ride along. Without further ado here's some of the things we saw and did over those four days!

It didn't take long for Charles to start spotting the good stuff. This 1955 Nash was his first stop between the airport and Vintage Roadside HQ. 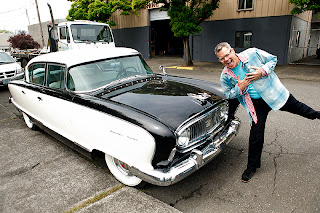 Then it was time for a quick "hello" to our Burger Family. Here's Charles giving Mama Burger a friendly pat on the belly. 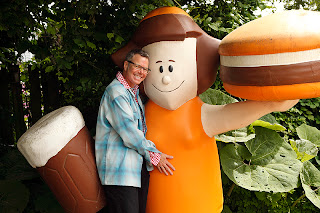 Next up was a visit to the Oregon Zoo for a ride on The Zooliner - a 1958 replica of the General Motors' Aerotrain. We made it just in time for the last ride of the day and it was a wonderful 4-mile trip through Washington Park. If you're in Portland you owe yourself a ride on this great little train! 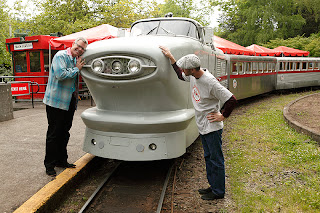 After our train ride we were lucky enough to follow the train back into the tunnel and spend some time talking with the gentlemen that care for and operate the zoo's trains. They were incredibly generous with their time and shared some amazing history with us. 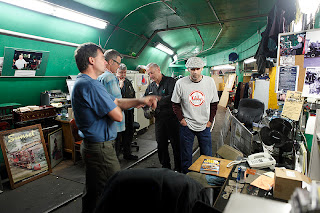 At this point it was time to grab something to eat. Our destination was The Original Taco House. The OTH is the sister restaurant to the fondly-remembered Waddles Drive In (which opened in 1938) and lays claim as Portland's first year-round Mexican restaurant. You'll find locations on both NE 82nd (the original location) and also on SE Powell. We chose the Powell location for our visit and thoroughly enjoyed our meal. 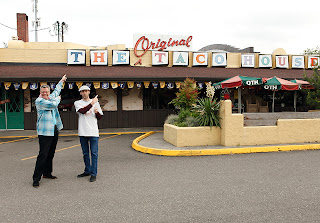 Then it was off for a little exercise to work off dinner. The activity of choice was roller skating at Oaks Park. The rink at The Oaks is the oldest continually operating rink in the United States, and to up the coolness factor, also features a massive Wurlitzer pipe organ. We had planned our visit for a night featuring live organ music and it's hard to describe just how amazing it it when the organ starts playing. Another can't-miss piece of Portland history. 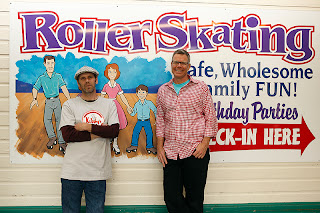 After spending some time talking with a gentleman who'd been skating at the rink since 1941 it was decided we'd wrap the night up with a look at the incredible Palms Motel neon sign on Interstate Avenue. We've personally photographed this sign hundreds of times and just never get tired of standing underneath it. It's truly a treasure among the neon sign world. 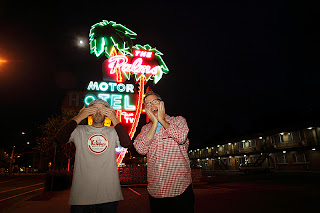 Day two started off with breakfast at another Portland institution - The Original Pancake House. Founded in 1953 by Les Highet and Erma Hueneke, the business has now grown to include 120 franchise locations, including their first-ever Japanese location opening soon. We were asking our server questions about the history and before we knew it both the 2nd and 3rd generation of the family were at our table talking with us! They kindly invited us up to the company offices after our meal to share more of the history and to make sure we had all the information we were looking for. Needless to say they made a fantastic impression. Oh, and the food was incredible...as a matter of fact we've already planned our next meal there! 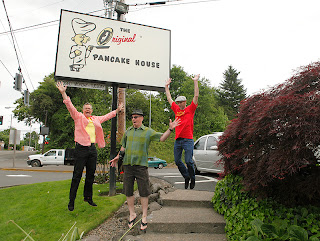 Then it was on to "Mission Myrtlewood." Charles had long known of the famous Oregon souvenirs made from Myrtlewood, and knew no trip to Oregon would be complete without taking a piece home. It took a bit of hunting around but we finally found this hazelnut snack set at an antique mall. The Phoenix household will now be graced with a little piece of Oregon. 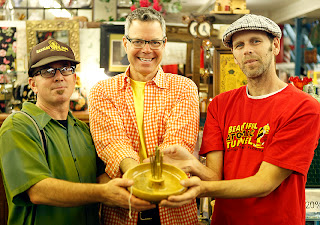 Since we were considering this a "road trip" of sorts the idea of eating on any type of schedule goes out the window. Case in point - we had just eaten a huge breakfast about an hour earlier but there was no way we could pass up the 99-year-old soda fountain at Fairley's Pharmacy on NE Sandy. And like on our visit last month, and well, almost every time before, I chose the chocolate malt. 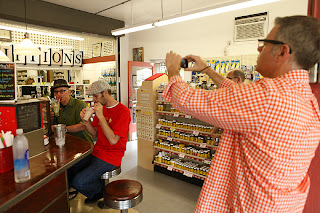 We spent some time poking around a few antique and vintage stores and then realized...it's National Doughnut Day! In honor of the "holiday" we visited another Portland location now known around the world - Voodoo Doughnuts. If you're in Portland on National Doughnut Day there's really no more perfect place to celebrate all that is doughnut. 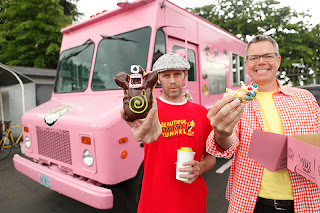 After the Home Tour on Saturday we managed to squeeze in a few more stops. We began at the old McDonald's building on SE Powell. We've not seen it used for anything in the past few years but we're glad it's still there to enjoy. Oh, yes the Camaro was the rental car for the weekend. Guess which of these three words describes the new Camaro: Subtle, Fun, or Roomy? Here's a hint - it's the middle one. :-) 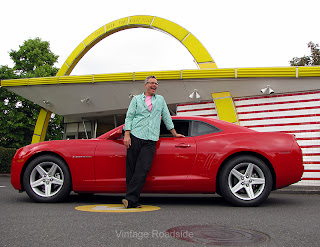 After some time watching the giant spinning loaf of bread on the Franz Bread building, it was over to the Lloyd Center Mall for a visit to Joe Brown's Carmel Corn. Started in downtown Portland in 1932, closed shortly after WWII, and then revived again in 1960 by Mr. Brown's sister Betty, you can still enjoy a bag or box of carmel corn served from the same location in what was once the country's largest outdoor mall. 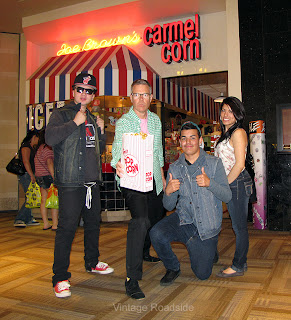 Our final stop of the day was for something Charles is well known for - his incredible suits. We had spoken with him prior to his visit and he asked if we might know of an airbrush artist to create a one-of-a-kind suit highlighting all that is Portland. We just so happened to know two local artists whose airbrush skills have always floored us. We put Charles in touch with Matt Stanger & Ian Pian and the rest is fashion history. 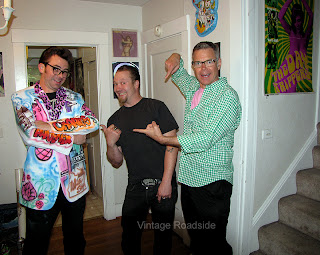 Here's a look at the suit in all its glory. 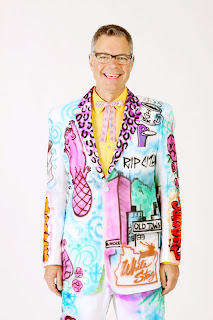 Charles' show on Sunday was an absolute home-run and everyone thoroughly enjoyed his personal take on our fair city! The weekend ended with a large gathering at The Alibi tiki bar and hopes of doing it all again soon.

We'd personally like to encourage anyone that gets the chance to see one of Charles' shows to not miss it. It's not often you can be entertained, educated and left shaking your head all in one amazing evening!