Here's Part 2 of our interview with Bob talking about his new Aquarena Springs documentary. In case you missed Part 1 you can find it here.

Bob: When I began the Aquarena documentary project back in 2006 my goal was to interview the people I knew that were still around San Marcos. It was somewhat easy for me because I already knew many of the people. The first person interviewed was my step-mother Shirley Rogers, granddaughter of Aquarena Springs developer A.B. Rogers, and daughter of Paul Rogers who continued the dream of his father. Shirley told me about Edwin Cooper, one of the first glass bottom boat drivers from 1946, and the 99-year-old gentleman who told stories about dancing on top of the Aquarena Hotel between 1929 and 1932. I found and interviewed them both.

Then I met some people I did not know at the 2009 Aquarena reunion. That was a great opportunity to hear stories that took place before I worked there. One of the gentlemen I did not get to interview was a San Marcos native who began working there when he was 12 years old and later became the CEO of Busch Entertainment. He told me he would love to be interviewed, but with so many other people to help tell the story I never did track him down...

Vintage Roadside: The reunion sounds wonderful. Any idea how many people came to it?

Bob: There must have been about 150 people there. I was like a kid in a candy store without enough time to eat it all! 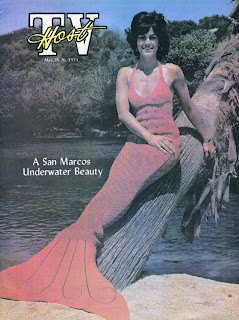 Vintage Roadside: Are there still former employees you'd love to talk with?

Bob: Yes, if there are folks out there who I did not get a chance to talk to I would love to connect with them to learn more of their stories.

Vintage Roadside: You put together an amazing archive of film and images for your documentary. How difficult was it to track those down?

Bob: I spent years collecting the photos and film footage. I first went to the Texas Department of Transportation Tourism Information Division's photo library where I found over 100 great vintage photos. Also, I found great photos at the San Marcos Library and the Texas State University library. Aquarena Springs also had some great video footage. I found some footage online that was shot in the 1960s and contacted that person and got approval to use some of it. Shirley, my step-mother, produced some pure gold with her 16 mm footage that was shot in the 1940s and 1950s. It included great footage of her father and grandfather at the first submarine theater performance as well as her family trip to Florida where her father had gotten some ideas from visits to Weeki Wachee, Silver Springs, and Marine Studios. There was also a film from the 1940s about the town of San Marcos that included the first glass bottom boat.

A Facebook page was created prior to the Aquarena Reunion in 2009 where I posted a request for images and footage - I got a good response from that, too. Also, the lady who trained Ralph the Swimming Pig had some great video footage as well.

In the beginning I thought I might not have enough images to back up the interviews, but as the project progressed I ended up way more than I could ever use in a single documentary. 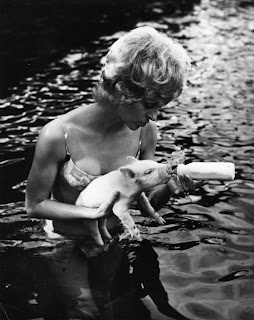 Vintage Roadside: How fantastic you were able to gather so much material. It sounds like you won the "Researcher's Lottery"! Any idea just how much material you collected?

Bob: I collected between two and three hundred photos and about 10 to 15 hours of vintage video and film.

Vintage Roadside: One of the great images you have is the photo we posted above of Ralph enjoying a meal. We've always been big Ralph fans - can you tell us a bit of his story?

Bob: Ralph the Swimming Pig was cool. He began swimming in the show about 1956. In the beginning they called the pig Missy, not sure why, just seemed a good name for a pig I guess. Then in the early 1960s, Barbara Backus, the swimmer who was Missy's trainer as well as an Aquamaid, was in the water training a new Missy. Fellow Aquamaid Virgie Sheets was helping Barbara. Virgie just happened to be going through a divorce at the time with her husband Ralph and was telling some stories about it to Barbara. Well, Barbara, for the fun of it started calling the pig she was training Ralph. It became sort of a joke to call that pig and then all the other pigs Ralph. The name stuck and the rest is history!

Ralph was always a hit in the show and soon began to appear on national television. He became the one thing that people wanted to see when they came to Aquarena Springs - slightly edging out the beautiful mermaids, believe it or not. 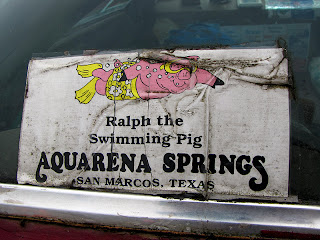 A vintage Aquarena decal spotted in 2011.

Vintage Roadside: You recently had a screening of your film at the Texas Music Center in San Marcos. How did the screening go? Did you have a nice turnout?

Bob: I used the premier as a fund raiser for the San Marcos Heritage Association. They in turn got to use the theater for free and we had over 160 people pay $10 each to attend the premier. We served free popcorn and there was a cash bar. At the end of the movie 90 copies of the documentary were purchased and we ended up raising about $2300 for the Heritage Association.

The film was shown in High Definition on a 20' by 20' screen and the sound system blew me away. The music that I had heard a million times while editing on my computer sounded so much better on their system. I heard wonderful sound in the music I had not heard before.

It was surreal sitting in the theater I had grown up watching movies in, with 160 people, most of whom I did not know, quietly watching, laughing, and crying at the documentary I had spent years creating. 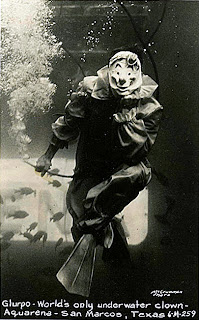 The one, the only, Glurpo!

Vintage Roadside: Before we ask you about some of the highlights of your film, we have to ask the one question most people ask us. Any idea why Glurpo was so frightening looking in his early costume?

Bob: Glurpo did start out dressed in an actual clown costume. Early photos (like the one you posted above) show him with a clown mask on, and a very scary one at that. Not sure why they would have a clown in such a scary looking mask, after all this was family entertainment. I'm hoping to hear back from some of the 1950s performers with their thoughts.

Later Glurpo wore a white swimming cap and a large red nose attached to his faceplate mask. In the late 1960s, the theme of the show was changed to a Polynesian Village and Glurpo became a witch doctor dressed in a grass skirt, beads, and a long-haired black wig. 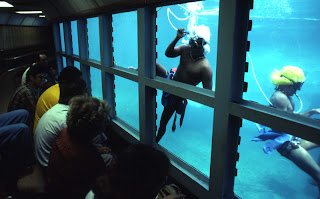 Vintage Roadside: Now that the DVD is available to purchase can you let people know a bit about the finished film?

Vintage Roadside: We've watched the film several times and it's amazing the variety of things you've included. Being fans of old roadside attraction billboards could you list some of the things we'd see on Aquarena and Ralph billboards along the highway?

Bob: Here's some of what you'll see in the film: 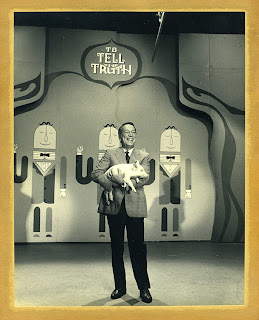 Ralph enjoying the spotlight on To Tell the Truth.

Vintage Roadside: Congratulations, Bob, on creating such a great film. On behalf of Aquarena fans everywhere, thank you for the years you put into this! Where can people order a copy?

Bob: You're welcome. You can purchase a copy of the DVD for only $19.95 at my website here.

We hope you've enjoyed our talk with Bob and that you'll pick up a copy of his film!