A little history to go with our Hula Hut t-shirt

One of our newest Vintage Roadside t-shirts features the long-gone Tucson, Arizona nightspot - the Hula Hut.

Below you'll find a bit of the history we've put together along with a fun photo of our Hula Hut t-shirt spotted in the wild. 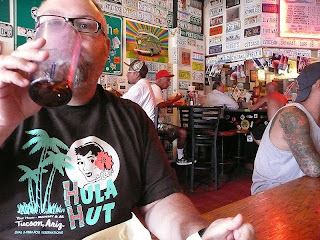 Known as a place to hear live jazz in the 1950s, legendary performer Anita O'Day sang at the Hula Hut as did "Queen of the Boogie" Hadda Brooks in 1957.

From the descriptions that we've uncovered, the Hula Hut lived up to its name by featuring all of the tiki decor and drinks popular in the 1950s. A great North Coast Journal article written by Joseph Byrd sets the stage:

"The Hula Hut's facade was bamboo, cluttered with flotsam and fishing nets; inside it was lit with torches...Primitive masks and "tribal" carvings were prominent, and tropical-themed fabrics festooned the booths. Hula girls were languorously draped around the printed menu, which featured exotic rum drinks, sweetened with fruit juices, flavored syrups and liqueurs. Beverages were usually served in equally exotic vessels, each with its garnish of fruit and oversized straw."

To read more of the history and to take a look at our Hula Hut t-shirt please visit the Vintage Roadside website here.

As always if you've got any memories or further history regarding the Hula Hut we'd love to hear from you!

Earlier this summer we were introduced to the artwork of Brian Burton. We thought it would be fun to ask Brian a few questions about his creations offered on his website Cowboys and Rayguns. Away we go!

Vintage Roadside: We love the name Cowboys and Rayguns. Iit's amazing how those two words together can conjure up so many images. Was that the first name you thought of or did you consider other names?

Brian: The other name I considered, which meant an affinity for nostalgia, sounded like a disease! Instead, I focused on reminiscing about my childhood when I used to play Cowboys and Indians with neighborhood kids. I think for Baby-Boomers, cowboys, like John Wayne and Roy Rogers, and rayguns, from 1950s sci-fi movies such as The Day the Earth Stood Still, immediately resonate with those of us born in that era. 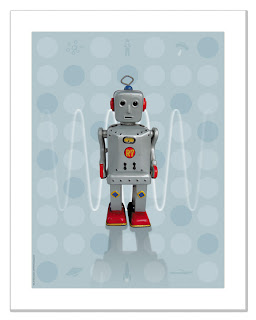 Vintage Roadside: Looking at your artwork you immediately get a sense of that time period. Could you tell us a little more about your connection to the items you feature?

Brian: These items are iconic to the Baby-Boomer era (1946-1964) during which I grew up. I had a toy version of the long-barreled Buntline Special gun Wyatt Earp used on TV. I also watched sci-fi TV programs such as Lost in Space and The Outer Limits. I loved playing with toy robots and rayguns. I think each poster image evokes a time-specific memory for the viewer.

Vintage Roadside: It's wonderful that the items you feature in your artwork are actual vintage items. Did you have trouble tracking down any of the items?

Brian: It took about three months to gather the items. I wanted original items - not replicas - complete with flaws. That's from 50 years of use! For example, the tabletop jukebox is the original Wall-O-Matic made by Seburg in the mid-1950s. In retro diners, many of the jukeboxes are replicas. The originals in good condition are hard to come by. The jukebox in the poster was purchased at an antique store. You can see areas where the chrome is pitted or there is a small amount of rust or scratches. The Roy Rogers lunchbox was purchased on Ebay after looking at many banged-up examples. The Duncan Yo-Yo and Lava Lite were purchased on Ebay as well. The roller skates were loaned by a friend of mine who used them when she was 15. She's 61 now. The TV console photo was provided by a collector on the East coast who has made a business of providing the movie industry with authentic old TVs for use in nostalgic TV shows and movies. Lastly, the robot and the raygun were graciously provided by toy collector Justin Pinchot who has a collection not to be believed. He tells me that the Pyrotomic Disintegrator raygun I selected to feature on my poster is among the rarest on the market today. The robot is called Flashy Jim and was part of a set of three from Japan in the mid-1950s. 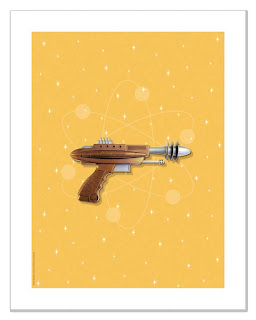 Vintage Roadside: Another nice feature of your prints is the background you use. Each one seems to have little "bonus" elements you might not notice right away.

Brian: I did a lot of research on vintage 1950s wallpaper and fabric design and came up with a set of quintessential "retro" patterns. I also spent time selecting a compatible color palette using more subdued hues so, if a collector were to feature all eight posters together, the colors would not clash. Additionally, I wanted to add some small design element that would relate to the main image.

Vintage Roadside: Your prints are very high quality. Tell us about the process you use to create them.

Brian: The prints are produced on an Epson 9600 professional color printer. This process is called giclee. The paper is Hahnemuhle Photo Rag from Germany, the highest quality art paper available. I contacted a number of studios that produce giclee prints to determine what stock would give the best results.

Vintage Roadside: Are there plans to continue creating prints in this series?

Brian: I think there are probably more iconic images from that era that could be featured, but the qualifier must be that the image is interesting to look at. I purchased a Frisbee and a hula hoop, but they did not hold my interest as I imagined them on posters so I rejected the objects. For now, I am satisfied with the current set. 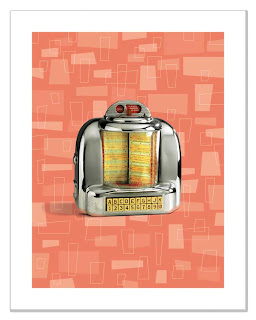 Vintage Roadside: You must get great feedback from people. Lots of stories about the Duncan Imperial or the RCA console television?

Brian: As far as the Duncan Imperial, people have told me that yo-yo pros from Duncan used to come to their school and demonstrate tricks. It started a yo-yo craze where almost every kid had one, carried it to school, and practiced tricks such as "Walking the Dog".

For me, I think the most interesting story is when I met Justin to give him the two posters that feature his vintage toys. He lives in a small house in a suburb of Los Angeles. When I walked in it was like a small museum. Shelves of small vintage toy robots, vintage microphones, window displays, and a set of rayguns. It was like an episode of the Twilight Zone, where a person steps off an elevator and finds himself in a fantasy world. The most amazing item? The original Buck Rogers raygun - in the original box, in mint condition - the same one used by Larry Buster Crabbe in the 1935 movie. Like the Mastercard commercial says - priceless! 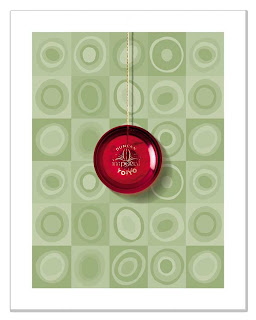 Vintage Roadside: Now that we've seen your artwork and gotten an idea of some of your favorite things from that era, what was that one toy you always wanted but never had?

Brian: Being a long times James Bond fan, when a toy replica of his attache case arrived in toy stores I had to have it! It featured a pistol that attached to a stock to make a sniper rifle (like the AR-7 featured in From Russia with Love) along with a throwing knife, hidden gold coins, passport, etc. Alas, I fell short on my allowance.

Vintage Roadside: Wow, that was quite a package! We can see how that one would have been on the must-have list for all young Bond fans.

Thanks again, Brian, for spending some time talking with us about your art and for the wonderful pieces you've created.


We hope you enjoyed our visit with Brian. To see more of his work you can find the Cowboys and Rayguns website here.