Some of you may know of our devotion to telling the story of the Aquamaids and Aqualads of Missouri's Aquarama - the 1960s underwater show once located at the Lake of the Ozarks. What you might not know is that we also have a huge appreciation for all of the other underwater attractions that were once located across the country. From the porthole bars of Miami to the Submarine Theater of Aquarena Springs - we love them all!

We're thrilled to present to you our first-ever interview with a former Weeki Wachee mermaid. So grab a seat next to the glass and get ready to meet Jo. 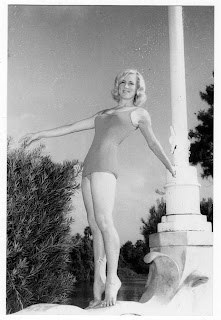 Photo courtesy of Jo
Vintage Roadside: Hi Jo! Let's start with how old you were when you started at Weeki Wachee.
Jo: I was 18 when I started a dream job as I call it! After all how many people can say that they have, or have had, a job that they loved to get up and go to and get paid to do it? I had the best boss, Genie Y. and the best trainer Susie S. ever, and may I say two of the most stunningly beautiful women I've ever seen. They were like sisters to me, I loved working with all of my mermaid sisters!!
Vintage Roadside: Any type of training people might not expect?
Jo: Most of the time we would start our days off at the ballet bar for about 45 minutes to an hour.
Vintage Roadside: What was your performance schedule like?
Jo: Our shows were as long as they are nowadays - about 45 minutes each, and we would do between 3 to 4 shows a day. Every Saturday night we had a deep dive, that was a special show as it looked totally different at night! I for one was not very fond of doing that show...LOL! The big hole was pretty scary at night and I always wondered what was beyond what we could see! Now I know it's one of the biggest cave systems in the US. Barbara W., a former mermaid has actually  been a ways into the cave - that is so awesome!
Vintage Roadside: How large was the cast when you performed there in 1967 and 1968?
Jo: It depended on the show and how many characters were in it. I'd also say there were at least 3 extra people in the water in case something went wrong with a hose or prop, etc. We had 2 amazing Water Boys (that's what they were called when I was swimming at Weeki Wachee) Allen S. and Steve K. 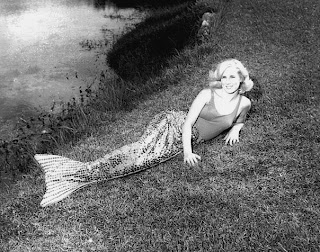 Photo courtesy of Jo
Vintage Roadside: Did you have a favorite routine or part you got to perform?
Jo: Now that is a big question to answer! I loved all of the parts, each and every one was so much fun to do. If I had to pick one from the Wizard of Oz routine I guess I would pick the Cowardly Lion. And in the Underwater Dreams Girls routine I'd say the Hula Girl.
Vintage Roadside: Those sound wonderful! Here's another tough one - which costume did you like better?
Jo: The Cowardly Lion costume was second only to the mermaid tail of course! LOL!
Vintage Roadside: Did you have any "famous" visitors to the show?
Jo: The highlight of my time at Weeki Wachee was meeting Miss Universe 1967 Sylvia Hitchcock. She was so pretty and sweet and she even swam a show with us! She gave me an autographed photo of herself in a bathing suit with her crown on. I still have the photo! 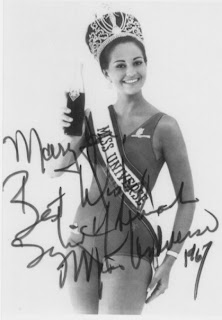 Photo courtesy of Jo
Vintage Roadside: We've heard stories from some of the Aquarama cast that things didn't always go as planned with the air hoses. Anything odd ever happen with yours?
Jo: We had 3 air hoses in the air tube between the Tube Room and the springs under the theater. I jump in, get to the first hose and take a breath, slowly exhale on the way to the next hose, get to it, try to turn it on - can't! Swim to the next hose - out of air! Can't turn that one on either - almost drowned my fool self! Lesson learned, never exhale all of your air!! Someone sure caught it after the show for tightening the valves too tight though!
Vintage Roadside: Wow! No wonder you still remember that. Any brushes with the local wildlife?
Jo: I once held up the show because of a snake in the Tube Room. They had to send someone down to get rid of it. I was up on the cabinet and was not coming down! I hate snakes...well to tell the truth I'm scared of them. My husband says they're more scared of me than I am of them and I say no way!
Some months later Barnacle Bill the Catfish made me late for a show. He met me between the first and second air hose in the tube and grabbed my tuxedo that I had draped over my arm. We had a tug of war going on for a while! He was the biggest catfish I had ever seen in my life but he wasn't getting my tux - I had to go do the "Puttin' on the Ritz" routine in it!
Vintage Roadside: Did you get to meet the public after your performances?
Jo: Yes I did, and that was so much fun. Even the grownups acted like kids - I loved it! 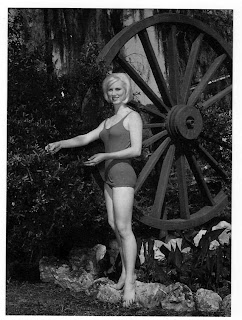 Photo courtesy of Jo
Vintage Roadside: We love the photo of you next to the wagon wheel. Was that a popular spot for photos?
Jo: Only to the photographer Claude - he used it quite often. We had another photographer named Sparky who just turned 90 this year. He was at Weeki Wachee on his birthday and he looked great! He remembers lots of things about working there too...amazing man and a sweet person!
Vintage Roadside: For some people the image they see when they think of Weeki Wachee is famous Adagio pose. It looks pretty effortless, any way it could go wrong?
Jo: The most embarrassing thing that happened to me was at the end of one of the shows myself and another mermaid were supposed to do the Adagio. I was the top half and she was the bottom half. I waited for the music cue, swam out and took my place, turned upside down and slowly began rising to the top of the water. The only problem - no bottom half! I still have no idea where my bottom half was! LOL! I got chewed out for that one. I learned another lesson - don't go anywhere without your bottom!! 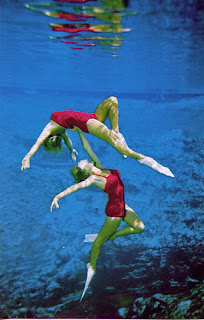 Adagio with top and bottom :-)
Vintage Roadside: Do you keep in touch with any of your former cast-mates?
Jo: Yes I do. And when I go to Florida I try to arrange it so I can go to Weeki Wachee to see everyone and watch the shows. Love seeing them and catching up on what they're doing and getting a few photos too. Facebook is also a great way to keep in touch. That's even how I met you guys! :-)
Vintage Roadside: The Aquamaids and Aqualads from Aquarama have told us how much fun it is to tell people they once performed in a mermaid show. What's the reaction like when you tell people you're a former Weeki Wachee mermaid?
Jo: It's great! One of my friends (Marty) was with me as I was mermaid hunting and she told the lady at the store I was a former mermaid. The lady looked at her like she was crazy! When I found my mermaid and took it to the counter to pay for it I said this one was going on my shelf with the others next to the photo of me in my mermaid tail. The lady said "OMG, I thought she was kidding!" How do you breath? Then she wanted to hear the whole story. :-) Most of all I get the biggest kick out of hearing people try to pronounce Weeki Wachee! Lol!
Vintage Roadside: We know that the "Formers" keep quite active and even perform on a regular basis. Is there a way to keep up with what's going on?
Jo: Yes! We have an organization that you can join called Friend of Weeki Wachee Springs. There are some great benefits if you join - admission to annual member celebrations, a newsletter, invitations to members-only events and more. The organization helps raise money to support the park and is only $15 to join or $25 for a family. 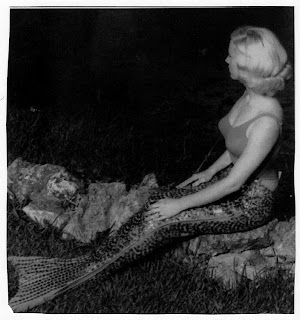 Photo courtesy of Jo
Vintage Roadside: Thank you so much Jo! It was an honor to share a bit of your mermaid history. Any final thoughts?
Jo: I would like to say that we had many talented people like Bonnie G. (who had a new show every year - now that's devotion) that worked at Weeki Wachee when I was there. I want to thank everyone that I worked with for making it the best and most memorable experience of my life! I still dream of swimming in the spring in my tail and as we say "Once a mermaid, always a mermaid!"
If you've got a question you'd like to ask Jo feel free to post it over on the Vintage Roadside Facebook page located here. Jo swims by now and then and we know she'd love to hear from you.
Jeff & Kelly
Vintage Roadside
Posted by Vintage Roadside at 11:29 PM 2 comments: