We recently caught up with someone we've long considered an honorary member of the Vintage Roadside family - the one and only Marina the Fire Eating Mermaid!

We've given presentations together on the history of mermaid and aquatic attractions at Tiki Oasis and The Hukilau and will be teaming up again for an all-new extravaganza for Modernism Week 2012. If you've ever wanted to see a comprehensive history of mermaid shows, along with vintage costumes used in those shows, vintage home movies, over 100 vintage images, followed by a finale that includes a live mermaid and fire eating performance, you'll want to be in Palm Springs on February 24th, 2012. Here's a link to tickets for this Palm Springs first.

Before we begin we would like to point out that this was the very first time we've interviewed someone wearing a bright pink gorilla costume. 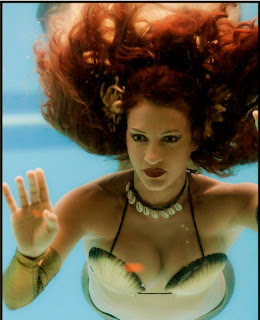 Vintage Roadside: Howdy Marina! So, "Marina the Fire Eating Mermaid" - some people might not know it, but that's just one part of what you do. Can you share some of the other aspects of your professional life?

Marina: Hi Jeff & Kelly! Ah, at the risk of sounding Munchausien - here goes. I'm a licensed pilot, marine biology and physiology major, Polynesian dancer, Middle Eastern dancer, fire performer, Wadaiko (Taiko) drummer, juggler, a former yoga & kickboxing instructor, vet tech, firefighter, EMT, & zookeeper (specializing in reptiles, primates, and bats) all of which have helped in my performances in one aspect or another. My performances include: fire eating, knife juggling, laying on a bed of nails, balancing on a ladder of swords, dancing on broken plates...whew! I know I missed a few other things...I still continue to train in all sorts of different disciplines to help enhance my work. As Eartha Kitt once said: "I am learning all the time. The tombstone will be my diploma."

Vintage Roadside: Wow! We're ready for a 3-day weekend to rest up after thinking about all of that. That's amazing. We've really enjoyed teaming up with you for several presentation on the history of aquatic shows. Could you tell us a bit about your favorite aquatic acts from the past?

Marina: I'm absolutely fascinated by Aquacades and the underwater shows that were put on during tourism's golden age. Back then, porthole underwater views were a lot more common and swim/dive shows would take place in many pools & even restaurants. Some shows even traveled. The idea of sitting and enjoying your dinner & cocktails while entertained by a beautiful swimmer as she dances underwater behind glass just floors me. I'm doing everything I can to make it possible for us to relive that experience. 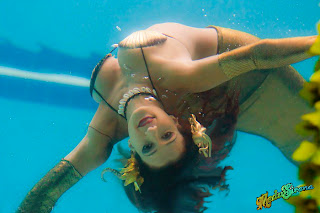 Vintage Roadside: We love the old Aquacade shows too. Billy Rose, Sam Howard, etc. We also really enjoy talking with the people who performed at the old attractions. Have you been lucky enough to spend any time with the performers from the past?

Marina: Yes indeed! I sometimes have the honor of performing for them. They'll come up and tell me what they've done and I'll just flip to learn they were in an aquashow, or Weeki Wachee in the early years, performed underwater for an old television series, or at an attraction that no longer exists. Most seem surprised at my enthusiasm at meeting them! After so many years of it not being noticed here's a gal in a pool jumping up & down in a tail (or whatever I'm wearing at the moment) to hear more...gosh...I could listen to those stories for hours!

Vintage Roadside: We know exactly what you mean. We love hearing from them, and doing what we can to share some of their individual history. So, with that said, who are some of your inspirations? 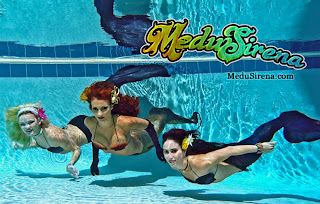 Vintage Roadside: Let's jump to the present and hear how that ties into a piece of history. You perform (along with your Pod) every Friday at a place with some amazing history - The Wreck Bar. Tell us a bit of the history behind The Wreck.

Marina: The Wreck Bar is a Porthole Bar located inside the Yankee Clipper Hotel which is located in Fort Lauderdale. The $1.5 million dollar hotel opened in 1956 and was built to resemble an ocean liner. The hotel was quite popular, not only due to the Wreck Bar, but also for their Polynesian Revue (pre-Mai-Kai) and became even more popular when NBC broadcast its noon and evening news from a studio on the 7th floor of the Yankee Clipper! The Wreck Bar, which was built to look like the inside of a sunken Spanish galleon, was quite large - sporting seven windows which surrounded the back of the bar. There were tables, too, as well as a stage and aquariums to enhance the underwater experience. Entertainment ranging from live music to comedy acts would take place inside along with the aquatic shows. The location has been used in television shows and films such as "Where the Boys Are", and more recently "Analyze This".

Vintage Roadside: We know The Wreck went several years without "Mermaid" shows. How were you able to convince them there was still an audience for them?

Marina: It was not easy. I had approached them five years ago and suggested the idea after noticing that the bar was practically forgotten by the locals and - GASP! - empty!!! They weren't too keen on the idea at first, though they humored me with an audition. Afterward when I wrote them and asked them how they liked it they mentioned not being interested...BUT they did say I could come and use the pool to practice anytime I wanted. Soooo...I did, every week...with full makeup and "fishtail". One month later the bar began to fill up...in two months the press started to take interest and the fan base began to develop...by month three I was "hired" by the hotel. MeduSirena Swim Shows have been going ever since.

Vintage Roadside: When you perform with your pod do you have choreographed routines?

Marina: There are very few traditionally choreographed movements. Since it's a bar I wanted to keep the shows organic - more like watching a fish in a tank rather than a "stage show". That way people who return will see something different each time. There are some set pieces, opening line-up for example, or the finale. There are skits that are rehearsed too. But, for the most part, I direct as it goes, kinda like an auctioneer deploying the MeduSirena Pod of "Aquaticats" (my title for my performers) at a steady clip. We don't have air hoses, and the pool is chlorinated (our eyes will burn out after an extended period underwater) so timing is definitely of great importance. 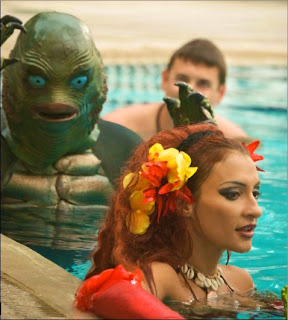 We hope you're enjoying our visit with Marina. We'll be back mid-week with Part 2. If you can't wait you can visit Marina's website here or her Facebook page here.

Posted by Vintage Roadside at 8:32 PM

This is fascinating. I've always wondered about these types of shows.

Great job! Marina is keeping a great piece of aquatic history alive. Floridians like her keep our state the wonderful state it is!