Just a quick post to let everyone know one of Portland's most well-known neon signs is lit once again for the first time since 1974!

The Oregon Leather Company sign in downtown Portland has long been one of our favorites and one we've always feared we'd never see lit again. Thanks to NBC and their series Grimm (which films around Portland) the sign is once again lighting up the corner of Second & Couch. We can't wait to spot the sign in an upcoming episode! 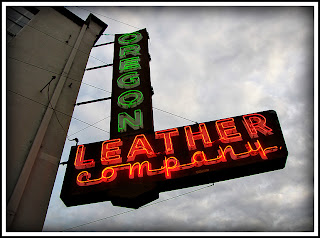 We spoke with a gentleman involved with the series and he was almost as thrilled as we were to have the sign working again. He mentioned that since filming often takes up on-street parking for blocks, and even closes streets at times, it felt great to give something back to the neighborhood.

Here's how the sign has looked the last 37 years: 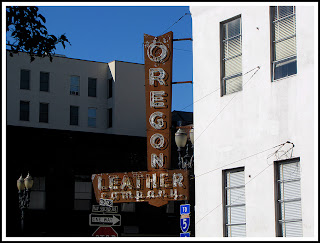 On the off-chance someone at NBC ever runs across this post please know how much we, as well as fans of vintage neon signs around the world, appreciate what you've done. Thanks!! 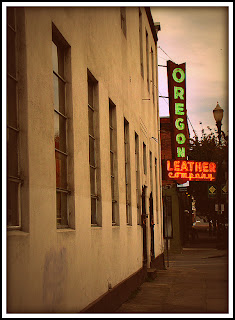 Posted by Vintage Roadside at 7:51 PM

Very nice photos and blog. I really like neon signs. I posted your blog on my OR travel page https://www.facebook.com/GoOregonNow

I didn't realize this had taken place. Thanks for the news! Thanks to NBC and Grimm. I have to say that I am addicted to Grimm. And I adore neon signs, which I really think ought to be spelled sighns when talking about neon 'cause it's such a blissful sight to see!