We're thrilled to be able to share our latest interview with one of the original Aquarama Aquamaids. Please give a warm welcome to Claudia!

Vintage Roadside: Prior to 1964 there had been nothing quite like The Aquarama at the Lake of the Ozarks - we're curious what your thoughts were about becoming a part of a show like this?

Claudia: The concept of an underwater show was new at the Lake of the Ozarks, and I was fascinated about how it would all happen. I would look at the pictures of Weeki Wachee and it seemed beautiful and unreal. There had been a Ski Show in the area for a long time, so the idea of another aquatic performance was interesting and people were curious about it.


Vintage Roadside: Were there any early thoughts of whether or not you'd be able to pull the show off?

Claudia: Yes, that was a topic of conversation in the Lake area. My Dad, Curley, became friends with Wally Johl. They were both mechanically minded and liked to create projects and build things. Dad had been a lifeguard and pool manager at a large aquatics center in Kansas City, and he was fascinated with the plans for building the Aquarama. I remember him and Mr. Johl discussing those plans at length. I also remember that some folks in town didn't believe Mr. Johl's plans would work and that the tremendous amount of water needed to fill the pool could not be held back by the glass windows. I remember dad saying that the plan was well engineered and that he thought it would work. It did, and Mr. Johl was proven right! 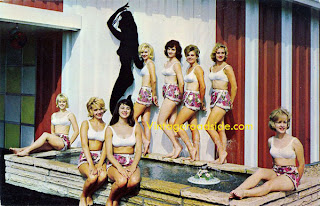 Claudia pictured standing 2nd from left against wall
Vintage Roadside: Was the Aquarama your first summer job?
Claudia: I worked as a waitress at the Pizza House on "The Strip" in Lake Ozark. I worked there the summer before the Aquarama opened, and I had promised to come back the next summer. I remember feeling so conflicted when I told them I wanted to swim at the Aquarama and not return to my waitress job. I felt sad about not returning, but the opportunity to be an Aquamaid was too exciting to turn down.
Vintage Roadside: We were lucky enough to recently meet Barbara who was also part of the original cast, but left the show after that first season. Do you remember Barbara?
Claudia: Yes, I have very fond memories of Barbara. We were all in awe of her because she was older (in her twenties!), glamorous, and had worked at Weeki Wachee in Florida. She wanted us to be physically trained and mentally prepared for our roles, so she made us practice hard, but she also realized that we were teenagers and allowed us to have some fun. I idolized her and listened carefully to her advice. She lived in a little cabin at a nearby resort, and I remember visiting there and thinking that one day I would be away from home and out on my own like she was.
Vintage Roadside: Do you remember those early practices?
Claudia: Oh yes! We had to practice in an outdoor pool until the pool at the Aquarama was filled. It was a chilly spring and I remember how hard we worked to synchronize our movements and learn how to control our breathing (no air hoses in that pool!) while trying to stay warm.
Vintage Roadside: Do you remember some of the acts you were a part of that first season?
Claudia: The theme was a trip around the world, and I remember the Hawaiian number where we did the hula in long Hawaiian skirts, the one in Tasmania* where we wore pink floral sarongs and formed the long dolphin chain, and the finale with Marc as the Statue of Liberty and the Aquamaids swimming with swim flippers to a John Phillip Sousa march.
* The girls are wearing the Tasmanian costumes in the postcard above
Vintage Roadside: Did you have a favorite routine that first season?
Claudia: My favorite that first season had to be the number from England when we did a Beatles song, I think it was "She Loves You." We wore black tee shirts and fluffy black bathing caps to resemble their trademark haircuts. I got to be Ringo, and I loved beating the drums, throwing my drumsticks up in the water, and trying to catch them before they floated to the top.
Vintage Roadside: Any memories of things not going quite as planned that first season?
Claudia: The costumes were all weighted, but often we would jump in the pool at practice only to have them "malfunction." Then it would be back to the drawing board, and Mrs. Johl would have to add more weights, etc. I remember the first time I tried on my Beatle costume as being pretty funny. I pulled on the black bathing cap and put the black tee shirt on over my suit. I then jumped in the water and puffed up like a marshmallow! I didn't make sure the cap was pulled down well, so it puffed up with air, and then the tee shirt didn't have enough weights and it ballooned up with the shirt tail floating up under my arms.
To be continued!
Jeff & Kelly
Vintage Roadside
Posted by Vintage Roadside at 12:16 AM