From Portland to Palm Springs along Highway 99 - Day 3

Welcome to day three of our trek to Palm Springs and the annual conference of the California Preservation Foundation. Today's section of Highway 99 took us from Stockton to the northern edge of Bakersfield where we've bunked down for the evening.

Stockton proved to be a challenge due to a court session which resulted in the closure of numerous parking lots and a perimeter of streets in order to provide media access to the courthouse. We had a tough time finding a place to park but, wow, what a downtown!

After circling...and circling...and circling, we finally found a 30-minute spot, threw the car into park, and worked our way over to the Hotel Stockton, a 1910 Mission style hotel noted as the Central Valley's first reinforced concrete structure. The hotel once featured 252 rooms and an extensive roof garden.

With the advent of the motor hotel, or motel as we now know it, the Hotel Stockton fell out of favor and eventually closed in 1960. Used as county offices until 1992, the hotel was restored and reopened to the public in 2005. With its upper floors dedicated to apartments for low and fixed income residents, the hotel continues to play a vital role in the life of downtown Stockton and is listed on the National Register of Historic Places. 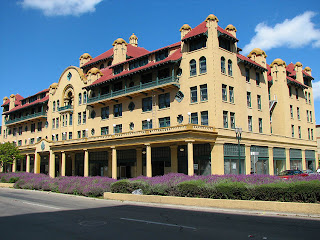 Next up was a look at the Stockton Savings & Loan Society Bank known for two important firsts: Stockton's first revolving door was located here and the building was regarded as Stockton's first skyscraper. The building is now home to the Bank of Stockton and is also on the National Register of Historic Places. 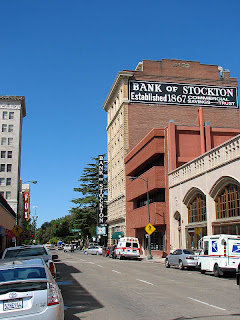 Although we didn't get to spend as much time as we would have liked exploring downtown, Stockton is home to an impressive list of 29 buildings listed on the National Register of Historic Places - definitely worth another visit.

From Mission style to a building shaped like a giant ice cream cone!

We stopped in Manteca to take a look at this little place mainly as a result of our A&W Burger Family. When we "adopted" our family, the gentleman we acquired them from mentioned he had built a drive-in shaped like an ice cream cone in Manteca. This was our first trip back since bringing the Burger Family home and the ice cream cone was the first thing to catch our eye on the drive into town along Main Street. We're happy to report it was open for business with people lined up for eats. 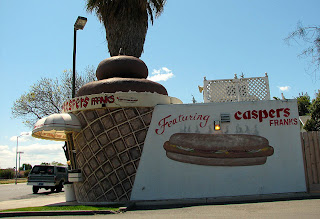 You'll probably have noticed by now that we really like the Welcome Arches found in various places along old 99. We were excited to get a look at this circa. 1912 Modesto arch after learning that the slogan "Water, Wealth, Contentment, Health" was decided after a contest, but was actually the runner-up slogan. The first place winning slogan was "Nobody's Got Modesto's Goat." Wish we could have seen that in neon! Thanks to Waymarking.com for the great story. 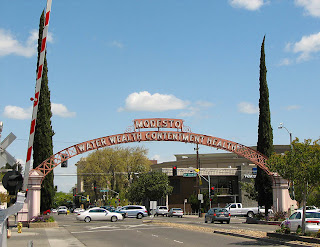 Modesto is also home to the Greater Valley Center Highway 99 Task Force, a regional non-profit organization working to transform roughly 280 miles of Highway 99 into the "Main Street of the San Joaquin Valley." A worthy project that we look forward to watching develop.

Following Modesto, we spotted this wonderfully maintained neon sign outside of the Rice Bowl restaurant in Merced along old 99, or 16th Street as it's now named. 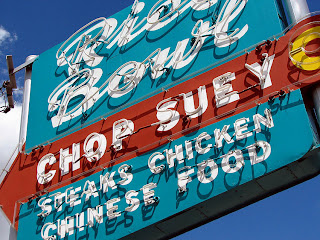 We promised fiberglass giants and we deliver! It's no secret that we would love to add a Muffler Man to our fiberglass family, and while we've not yet found the right one for us, this one at the local agricultural museum made our day. The museum was closed, but we managed to catch this shot before that ominous cloud you see in the background (we think it followed us from Portland) blocked out the sun. 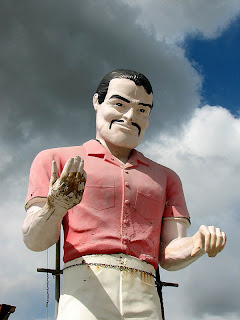 Next up - Madera. The sun had finally broken back through the clouds which prompted us to execute a somewhat questionable driving manuever in order to stop by Farnesi's Restaurant and Coffee Shop just off the Gateway Drive exit. 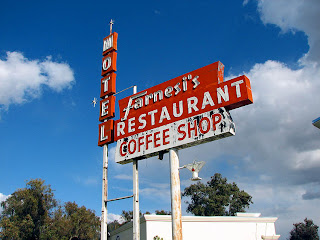 We were also happy to find this car dealership in Madera with an appreciation for vintage neon signs. In addition to the Buick sign they also display a vintage GMC Trucks neon sign. 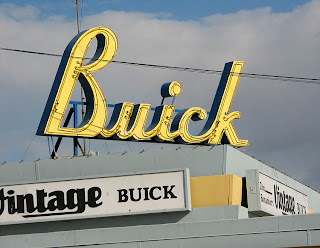 Moving on to Fresno, we checked out a stretch of old 99, now named Golden State Blvd., and found this old motor court sign, one of a cluster of great old signs and mostly closed motels that once thrived along the highway. 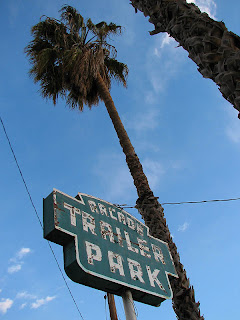 Sadly, we just learned that the Storyland Inn has been condemned by the city of Fresno. We hope it might be possible to preserve the two wooden soldiers still guarding the entrance. 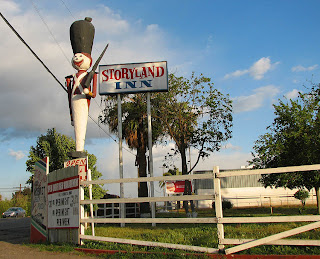 In that cluster of signs we mentioned along Golden State Blvd, we liked this combination of signs side by side: a Googie style coffee shop sign in front with the iconic Fresno Motel sign featuring a diving girl in back. 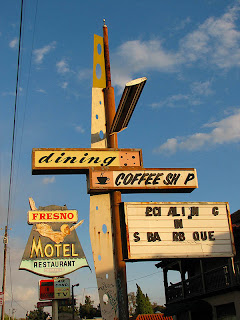 Toward the end of the day we passed through the small town of Fowler. We like to pretend that the town was named after Jim Fowler from Wild Kingdom, but are guessing that's probably not the case. As fans of the allure of neon, we were excited to see that the town had installed a new neon sign with an arrow leading to their downtown business district. Way to go, Fowler! 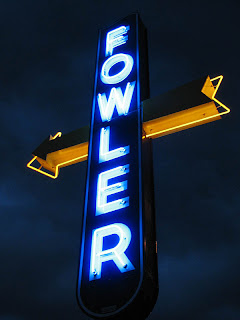 Signing off for now - on the road again in the morning for the final leg of our trip. Palm Springs or bust!

another great day on the road!

Was that the "Rare" Burt Reynolds Smokey and the Bandit Muffler Man?
Another nice day on the road!

Rick - Thanks again for riding along with us on this one!

Austin - Indeed it is:-) We didn't show the 50' fiberglass Trans Am next to him.

Gunnar and Sherry - Thanks for the kind words! The Muffler Man is starting to show his age a bit. I like the idea of a Muffler Hit Man though:-)

hey you guys, I am getting so nostalgic. California is my state and all those signs remind me of car trips in the station wagon with the 4 kids. Love the blog.

Caren - Thanks for the comment. So glad you're enjoying the blog. Hopefully you guys have a great trip down here soon. Looking forward to seeing you when we get back.

So I'm sitting here, impressed as usual, what a great trip you're having down south. Also thinking that with 29 historic buildings on the register why am I enamored with the simple stuff like the hot dog shack and the storybook motel?!

Wishing you both a happy weekend!

Tina - Thanks for the comment! We know what you mean on the simple things. One of our favorite aspects of preservation is that it covers such a wide variety of places and architecture.

My very own self said...

I'm loving your blog! I'm now feeling very lucky that I'll be traveling this stretch of Highway 99 in about 10 days.

I cannot seem to find any information about that ice cream shaped building in Manteca- do you have an address for that handy? Or can you tell me the general viscinity? I'd really hate to miss it!

My very own self - So glad you found our blog. We love that stretch of Highway 99!

Have a great trip and take lots of photos!