Everyone back on the bus! Vintage Roadside is now headed back to Portland, Oregon from Tulsa and our goal is to drive as many 2 lane highways between here and there as possible. We've decided to take a different path home, so those of you playing the home version can begin with your game piece on Route 66 heading west out of Tulsa.

We're looking forward to spending a few more days on the road and discovering more of the things that make a road trip so special. We hope you'll enjoy following along once again. Bonus points for vintage neon signs! 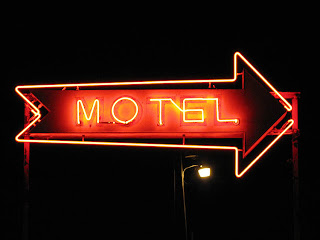 We spent the first part of the day winding our way along Route 66 as we wanted to get another look at Stroud, home of the Rock Cafe. The Skyliner Motel had a real gem of a sign. If we were looking for a motel for the night we would have checked this one out. We then headed west for another 200+ miles until we reached Sayre, Oklahoma. There were numerous old gas stations and other roadside relics to make the hours slide by. 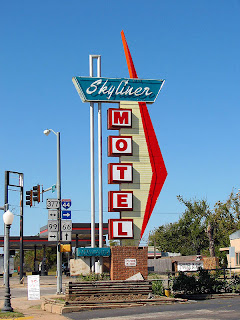 Once we hit Sayre, Oklahoma, we decided to hang a right onto Highway 283 and head for Dodge City, Kansas. This decision was based on the fact that we'd never been to Kansas and Dodge City had a nice appeal. Didn't Dodge City used to have Old West gunfights? Only one way to find out! One of the things we really enjoy on our trips is having a Point A and a Point B with nothing but an atlas to help make spur of the moment directional decisions. 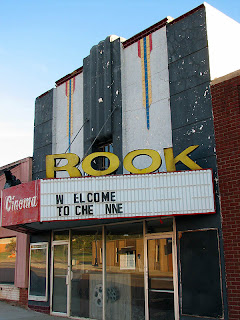 We always enjoy looking at the downtown and/or business district of any town we drive through and one of our favorite things to look for is the theatre. Before television and strip malls came along, just about every town with a few hundred people had one. While many are now sitting quiet, it's still reassuring to see them. As long as they're still standing there's always a chance they'll someday be brought back to life. Cheyenne, Oklahoma was no exception. The Rook Theatre had some wonderful art deco elements and maybe next time we pass through it'll be lit up again. 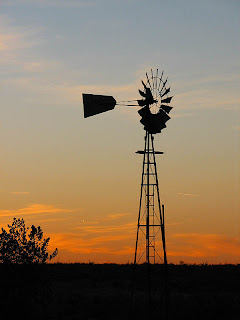 As we headed north up through Oklahoma we found ourselves to be the only car on the road for 100 miles or so. The weather was perfect and we were treated to a fantastic sunset. We thought the photo above captured the feel of that part of the state. We don't have many windmills in Oregon so it was fun to see and hear them spinning away out in the fields. Little did we know we were about to discover a real roadside treasure. 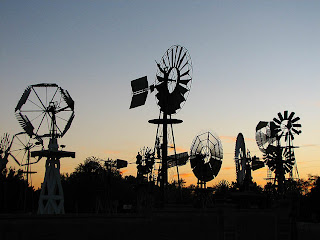 As we pulled into Shattuck, Oklahoma we saw another windmill on the horizon. As we got closer we realized it wasn't one windmill, it was dozens! Needless to say the car was basically on autopilot as we headed for a new discovery: the Shattuck Windmill Museum & Park. As we jumped out of the car the sound of all the windmills spinning away became something we'll always associate with this trip. 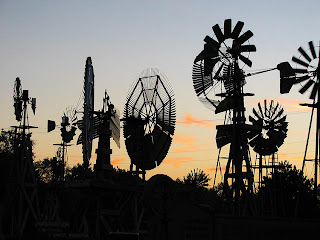 The Windmill Museum has 45 vintage windmills along with a handful of period structures. The windmills have all been beautifully restored and each one is a different make or model. The museum was dedicated in 1996 and has grown over the years to include a half-dugout home and a story-and-a-half farmhouse moved to the grounds from outside of town. 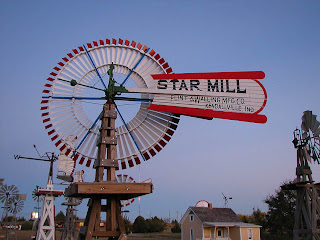 If you're ever near this part of the country we'd highly recommend a stop. The museum is open every day of the week and the pride and craftsmanship is quite evident. These are the types of treasures that make it worth the time spent off of the interstates. 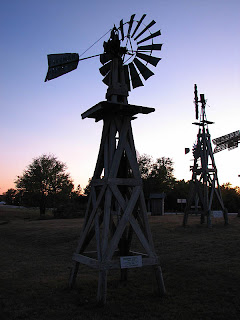 A last look at one of the windmills in the 4 acre park. 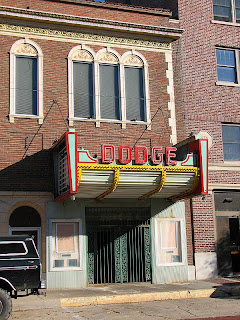 One of the first things we saw in Dodge City, Kansas was another wonderful theatre. The marquee on the Dodge has a great shape and the doorway also has some fantastic ironwork. 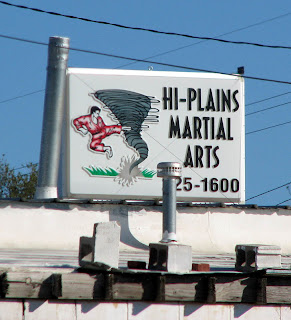 Here at the end of the day we'll leave you to ponder what might quite possibly be one of the most amazing backlit plastic signs ever. Just take a few moments to consider the fact that the gentleman on the sign is so incredibly tough he has now moved on from human opponents to whipping up on Mother Nature!

Tomorrow we'll be heading out from Kansas to somewhere in Colorado. We're looking forward to seeing how dramatically the environment changes.
Posted by Vintage Roadside at 9:26 PM

wonderful all these windmills!

Paula - They were wonderful! One of our favorite things on the trip.