Let's rejoin Dian and the rest of the 1964 Aquarama cast as they complete their initial training for the debut of the Aquarama...

Vintage Roadside: You were lucky enough to have a very special co-worker that first year - former Weeki Wachee performer Barbara Hodgson. Do you remember Barbara?

Dian: Yes, I remember Barbara. She must have been in her early twenties, and with me being 15 she seemed very worldly and glamorous. She had made the trip alone to Missouri to teach and train a group of fledgling mermaids in a few short weeks. At the time, being 15, I neither worried nor thought about anything more than what I would wear and where I would go on the next date, but looking back that was a very large responsibility given to Barbara!

I remember she was so patient explaining all of the plans, the routines, the training, the eating expected and the importance of stretching and excercising to build endurance. I remember we would all sit in the lobby of the Aquarama on a regular basis and stretch together and visit and get to know one another. I'm sure it must have been a lonely time for her and yet she pulled it off! Mission accomplished! 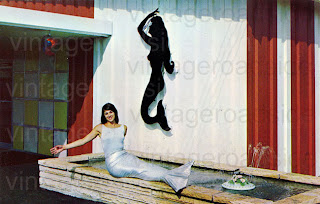 Former Weeki Wachee Mermaid Barbara Hodgson
Vintage Roadside: Before we jump in and talk about the performances we wanted to ask you about the costumes you wore that season. Do you have any memories of the costumes?
Dian: I do remember several. For the most part we wore white two-piece suits and then would put on various skirts, vests, etc. with velcro for fast costume changes! Remember, after a scene we would either swim to the side of the tank behind a partition and change the costume underwater (hooking the costume pieces securely so they could not float away) or we would swim back up the tunnel to the ladder, climb out of the tank to the dressing room, change the costumes very quickly, climb back down the ladder, swim through the tunnel and find our position underwater - Whew!!
The costumes were simple, to convey the idea of the act, but very colorful and sparkly! Much time and thought were put into the creation of the costumes. Mrs. Johl must receive the credit for their beautiful design. They needed to look light and beautiful, yet hold up to being pulled and yanked upon for quick changes. They also had to hold up as they were underwater, then dried, then placed in the water, etc. over and over and over again!
Vintage Roadside: So here we go! Memorial Day Weekend 1964. Do you remember the theme for that first year?
Dian: The show that original year was an underwater tour around the world. You, as an audience member were traveling around the world, and at every port you would dock and scenes of the mermaids in that part of the world would unfold for the audience. I remember a bullfighting scene with a matador and bull, Hawaiian wrap skirts, English Guard's jackets, circus acts from France, etc.
Vintage Roadside: Was there one part you really wanted to perform?
Dian: I always loved the routines with the mermaid tail! That first summer Barbara did that scene the most as it was more difficult than it looked. The tail, of course, was full of water and was sooo heavy! And swimming horizontally, kicking your legs together, maintaining your position in the middle of the glass, waving and smiling was crazy difficult! I just thought it was the ultimate routine though. If you were a real mermaid what could be better?!
Vintage Roadside: Let's talk about the shells. Did you get to pop out of a shell?
Dian: Yes, I maintained residency in many a clam shell! I remember we would climb down a ladder in the dressing room into the darkened tank, hold our breath and swim down a dark tunnel and then out into the main tank and find "our" clam shell. When you were curled up in the lower part of the shell you would grab the strap and pull to lower the shell top then just lay there curled up in the shell patiently waiting for the lights to come on and the music to begin!! Actually with the weight of the water the opening of the clam shell could be difficult as they were heavy. A little trick was to grab your air hose and put it inside the shell as you were raising the "lid" and the force of the air bubbles would assist in the lifting of the shell.
Vintage Roadside: Any other memories of the clam shells?
Dian: They introduced live fish that summer - not sure if they lasted long term? They were the large goldfish that were yellow but also they had icky black ones with bulging eyes. Sometimes you could feel something inside the shell with you and I always hated it when I had to share the interior of my clam shell with a fish friend waiting in the dark for the lights and music to begin!!!
We hope you'll join us for Part 3 of our interview with Dian as she shares more of her favorite routines, what led to her departure from the Aquarama and her thoughts on how it felt to be an original Aquarama Aquamaid.
Jeff & Kelly
Vintage Roadside
Posted by Vintage Roadside at 12:14 AM