We're back from attending the California Preservation Foundation annual conference in Palm Springs and wanted to share a sample of the things we saw while we were in town. After a few days without internet access let's get right to it!

Here's a shot of the beautifully reconstructed El Mirador Hotel Tower. The original tower was built in 1928 and stood over the hotel until its closing in 1973. The tower was lost to fire in 1989 but was rebuilt from the original plans in 1991. 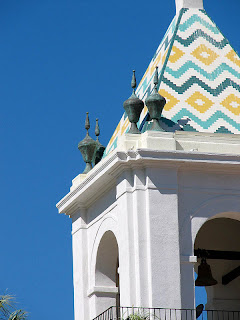 We had heard good things about the Caliente Tropics, designed in 1964, and chose that as our home base for the conference. What a great choice it was!

The Caliente Tropics is regarded as one of the finest surviving Polynesian/tiki themed motels in the country. From the tropical plantings to the onsite bbq's we couldn't have asked for more relaxing lodging. Plus it gets bonus points for having been visited by Elvis Presley and Nancy Sinatra.

The awning over the entry is a great example of 1960s tiki architecture. 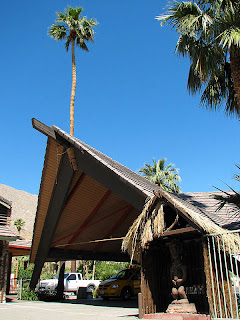 Our mascot posing with one of the many tiki statues surrounding the motel. 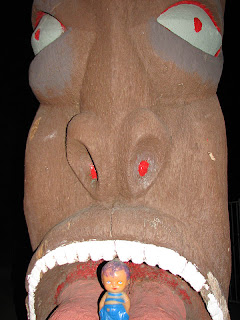 Our mascot gets into an Apocalypse Now state of mind. 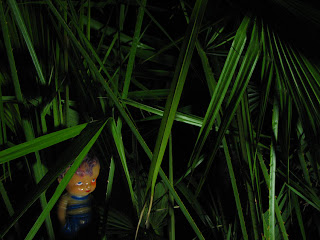 Another look at the entry and the former Reef Bar restaurant on the left. We've read a few websites that covered the demise of the restaurant, along with concern that the building may be remodeled into a diiferent architectural theme. We were thrilled when we were told by the motel that they expect a new tiki themed restaurant to open in the coming months. 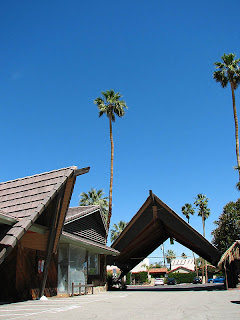 Here's a wonderful roof line on one of the Alexander built steel houses - one of seven unique homes constructed in 1961. Designed by Donald Wexler, the original plans called for 38 homes to be built. Thanks to preservation efforts all seven still remain. 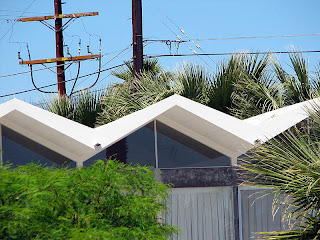 Here's a shot of the Kaufmann Desert House designed by Richard Neutra in 1946. The home became well known in 1947 with the publication of photos by photographer Julius Shulman. Considered by many architectural critics as being one of the five most important houses of the 20th century. The home has undergone painstaking restoration and is currently for sale. 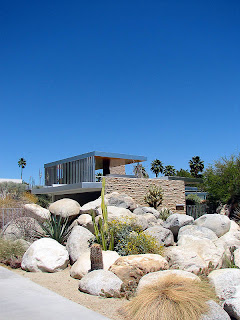 One of the most awe-inspiring buildings we saw was the House of Tomorrow, designed in 1962 by William Krisel for Robert and Helene Alexander. One of many Krisel homes in the area. This home also served as a honeymoon retreat for Elvis and Priscilla Presley. 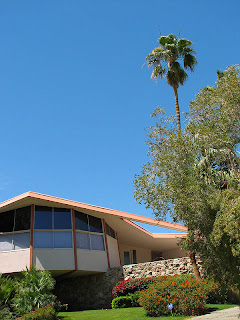 The 1965 Tramway Gas Station building designed by Albert Frey now serves as the Palm Springs Visitor Center. Inside you'll find a large selection of Palm Springs literature along with the invaluable "Map of Modern Palm Springs" produced by the Palm Springs Modern Committee. The map provides locations for 75 of the best examples of mid-century architecture, both residential and commercial, in Palm Springs. 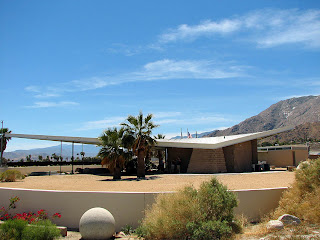 Driving through one of the neighborhoods on the map we were stopped in our tracks by this colorful cluster of metal statues. We later learned that we had gotten our first look at the amazing creations of artist Kenny Irwin Jr. which cover his four-acre property. 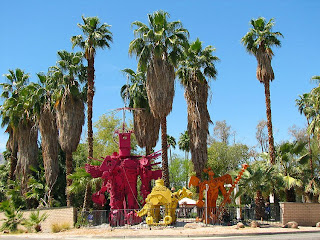 We would like to finish up our Palm Springs post with heartfelt thanks to everyone who made this such a fantastic road trip for us.

For everyone who followed along with us on the blog, we hope you enjoyed the trip as much as we did! We loved your comments and look forward to our next road trip together.

And to just some of the special people we met at the conference:

Michele Gates, Judy Chen, and Cindy Heitzman of the California Preservation Foundation. We couldn't have felt more welcome as first time exhibitors. A special thanks to Michele for encouraging our idea for a preservation-themed road trip to Palm Springs.

Mr. & Mrs. William (Bill) Krisel for spending 45 minutes talking with us about everything from video games to front porches.

Gary Johns and Kip Serafin of the Palm Springs Preservation Foundation. Thanks to them, we are currently researching ideas for a fun Palm Springs Vintage Roadside t-shirt.

Marci & Austin of Sputnik Housewares for making the trip down from Portland...now if we could only convince you to come along on every road trip!

Bob Bogard of the Palm Springs Art Museum for sharing his enthusiasm for the museum's architecture...and for looking so great in our Pixieland t-shirt.

Nickie McLaughlin of the Palm Springs Modern Committee - we hope to see you next year during Modernism Week.

Sheila McElroy of the California Preservation Foundation for running one of the most exciting silent auctions we've ever seen.

Gloria Scott of Caltrans for sharing her encyclopedic knowledge of roadside architecture.

Kristin Leuschner of the Society for Commercial Archeology. Great to see you again after Tulsa. Looking forward to seeing you in Nashville!

And to everyone who stopped by the Vintage Roadside booth. It was wonderful to see friends we had met in Tulsa last year at the National Trust for Historic Preservation conference and to all the new people we met over the conference - you really made the trip special!
Posted by Vintage Roadside at 12:27 PM

Still laughing at the mascot in the jungle quip, lol! Those tiki-inspired buildings are awesome. Can you imagine living in that 38-home community of mid-century homes if it had actually been built? Back then it would have just been the thing but now they'd be worth a fortune...glad to know they've been protected. Never been to Palm Springs and now might need to check it out just due to your endorsements--and the photos didn't hurt either. Great work, guys, thanks for taking us such neat places via our armchairs and the magic of the internet!!

Rick - The annual conference for the National Trust for Historic Preservation will be in Nashville this year. We're already planning the road trip from Oregon to Tennessee and will be doing a daily blog of the road trip. It's going to be a hefty drive!

Tina - Thanks for the kind words! Really glad you enjoy "riding" along with us on our trips. It's great to see your comments:-)

The steel homes were apparently quite reasonable as recently as a decade or so ago. Now, not so much. Palm Springs was wonderful. If you ever get the chance....

It was very kind of you to give me a shout out regarding the Palm Springs conference auction. It was exhausting but fun. When we locate the photograph of our "Dapper Dans" I'll forward it to you. Proudly wearing my pink Canadarago shirt as often as possible. Check out my website at circahistoricproperty.com and go to "Projects" to see the beautiful Butterfly House. I'll check in on you soon.

It was very kind of you to give me a shout out regarding the Palm Springs conference auction. It was exhausting but fun. When we locate the photograph of our "Dapper Dans" I'll forward it to you. Proudly wearing my pink Canadarago shirt as often as possible. Check out my website at circahistoricproperty.com and go to "Projects" to see the beautiful Butterfly House. I'll check in on you soon.